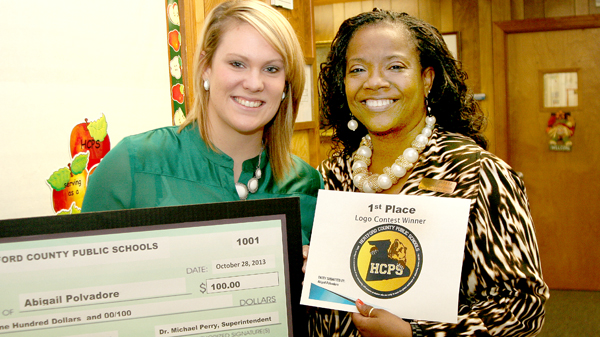 WINTON – “I wanted something that made Hertford County distinct.”

Those were the words of designer Abigail Polvadore explaining her award-winning entry that has been selected as the new logo for Hertford County Public Schools.

Polvadore’s submission beat out more than 36 entries that were reviewed by a group led by HCPS Public Information Officer, Brunet Parker. There was a $100 prize for submitting the winning entry.

The design, featuring a map of the county overlaying a ferocious black bear – the only bear species found in North Carolina or anywhere in the eastern United States – who is emerging from behind the delineation with a mighty roar, its claws bore.

“I wanted these students to feel like the bear, that they could conquer anything,” Polvadore said in an interview after the announcement.

The three finalists were announced at the Board of Education meeting Monday night. Ahoskie’s Renee Stackhouse of Ahoskie’s design was second runner-up while Angel Staton – a student at Hertford County High, also from Ahoksie – was first runner-up. They received a prize of $25 and $50, respectively.

“I had read in the News-Herald about the logo contest and decided to enter,” said Polvadore, a 2009 graduate of Gates CountyHigh School and 2013 graduate of Chowan University’s Graphic Design program. Her parents, Tula and Don Polvadore, are former teachers at Hertford County High School.

“My inspiration was that I was looking for something that would brand the whole community.”

Polvadore made three different designs before settling on the eventual winner.

“One (design) featured artwork of school books and computers while the other featured a bear’s image in a circle,” she recalled.

Somehow she says her mind seemed to keep coming back to the theme of the furry, lumbering carnivore.

“And that’s when it hit me to design the bear holding Hertford County,” she says.

The bear is featured all throughout the school system: it is the mascot for the senior and junior high schools, as well as being part of the name of Ahoskie’s BearfieldPrimary School.

“I didn’t think they would pick a non-student,” said Polvadore. “Both of the other choices were very good, but I’m excited that they chose mine.”

This is not Abigail’s first venture into logo design. Just after graduating from Chowan this past May she designed the new logo for Roanoke-Chowan Community College in June.

Currently, she’s working on a poster design for Dynamic Towing located in Virginia and she’s also looking for any other graphics work that might come her way.

“Let them know I’m available for any design work,” she said with a smile. “And I’m looking forward to it.”

Polvadore’s work will be featured in the future on all school stationary and other official mailings, letterhead, the HCPS web site as well as prominently displayed at all eight county public schools. It will even be used on pens, caps and T-shirts to represent Hertford County.

“We want to thank the community for being involved in this competition, especially our three finalists,” said Parker.  “Anything that we give out as a representation of the district will be featured with this particular logo.”