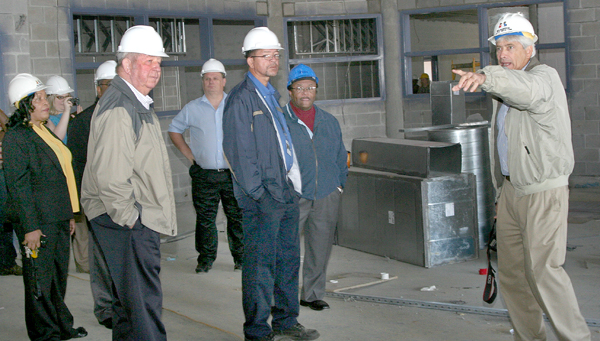 After more than a month of delays with everything from scheduling to rainy weather, members of Bertie County’s Board of Commissioners and the Board of Education toured the new Bertie High School construction site on US-17 North here on Tuesday.

And based on the post-tour reviews, everyone from students, to faculty, to staff, to parents, to nearly every citizen of the county will love this facility once it’s completed.

Completion for the project is nearly 30 days ahead of schedule – if there are no delays. Construction should be finished by sometime in late March of 2014, with another month to move in furniture. A dedication date has not been set, but occupation of the school will be able to take place beginning in June.

Architect Jimmy Hite of Hite Associates in Greenville personally led the two boards throughout the over 200,000 square foot tract. Along the way, Hite and staff schools consultant, Ann Williams, pointed out ways in which the $21 million structure is being efficiently constructed and will be efficiently maintained.

The building is shaped like a giant “H” with a vertical line running thru the middle. On the north end will be the gymnasium complex with the south end housing the auditorium and cafeteria. The cross-shape in the middle will house classrooms, administration, and the library.

The entire structure is sealed with special insulation from roof to floor, allowing for not only quiet and comfort, but also for energy efficiency.

Another advantage of the building’s being solidly built is the safety factor in the event of an extreme weather event.

Meanwhile, the separation of the large crowd areas (gym and auditorium) will allow each to function separately and independently.

“You can have a play in the auditorium and a basketball tournament in the gym going on at the same time,” said Hite. “Neither will be affected by the other. In fact, you won’t be able to hear (the transfer of) the noise. Nobody would know they’re in the same building.”

Each section of the school will also have programmable “security zones” with coded entrance.

“If a coach wanted to have practice, they would be able to take down the security in his part (the gym) without compromising the security of any of the other sections in the rest of the school,” Williams said.

“And some people, the principal, the custodian: their code would drop (security in) the entire building,” she added.

Instead of utility equipment such as heating and air units located on the roof, it will instead be housed indoors on the second floor of the building, known as ‘the platform’. The concept, says the architect, is out of the elements and is easily serviceable. The second level can also serve several purposes.

“The way things are going now with these classrooms it’s all wireless,” said Hite. “That platform up there they can put antennas in every classroom for inter-connectivity in a wireless mode.”

“You’ll never see an inch of square footage on the first level that could be used for a classroom taken up by big air handlers,” Williams said. “Everything is up here (second level): data, security, alarm, telephone, everything is there. It’s the kind of place the public won’t see, and the children won’t see.”

After the members of the boards had toured almost every square foot of the new school they seemed to come away impressed.

“Outstanding,” said BOC chairman J. Wallace Perry. “It’s going to be a first-class school of cement and steel. It’s going to last a hundred years and we should never have to build another school in Bertie County in a lot of lifetimes.

“The architect didn’t leave anything out,” Perry added. “It looks like it’s got it all in there.”

“It’s exciting,” said school board chair Emma Johnson. “With the building being beautiful I hope that some great things in learning can take place because this facility allows teachers to be quite creative in teaching students.”

“It’s top-notch,” said school superintendent Elaine White. “Of course, a building is not going to give you a good education, but it’s a good start. Bertie County is on the move.”

“What sold us were the savings we could get from it,” said commission vice-chair Charles Smith.

“I was in awe,” said school board member Tarsha Bush-Dudley. “It‘s truly a phenomenal structure that will assist in preparing our students for the 21st century. The students and citizens of this county deserve a school such as this and I am eagerly awaiting to see the excitement on their faces as they enter for the first time.”

“Well designed, on schedule,” said commissioner Ronald D. Wesson. “I’m glad we had the foresight and the guts to make an effort.”

A luncheon for both boards followed at Windsor’s Heritage House Restaurant, after which the commissioners met to receive a tutorial on new tablet technology.