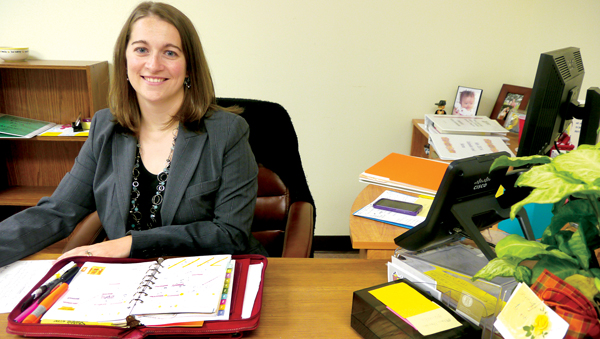 Stephanie Parker-Helmkamp, who has been with Hertford County Cooperative Extension as the Family and Consumer Sciences Agent since 2006, has been promoted to the County Director’s position. Photo by Caroline Stephenson

WINTON – As is so often the case, whatever you are searching for is right under your nose.

Stephanie Parker-Helmkamp has been named as the new County Extension Director at Hertford County Cooperative Extension. She is a HertfordCounty native and graduated from Hertford County High School in 2001.  After that, she went on to East Carolina University where she earned a Bachelor of Science degree in Health Education and Promotion in 2006.

In June of 2006, Parker-Helmkamp started working for the North Carolina Cooperative Extension Service as the Family and Consumer Sciences (FCS) Agent in Hertford and Gates counties.

Parker-Helmcamp said she loves her work as the FCS Agent and is excited to continue it in her new role.

“I want to give back to the community.  I look forward continue working with Hertford County citizens to get their agriculture, youth development, and family related questions answered by our agents using research based information,” she said.

“I am most proud when people tell me that my classes or programs made a change for the better in their lives,” Parker-Helmkamp said. “During SHIIP, I helped a person who couldn’t pay for their medicine at the beginning of the appointment save $1,000 a year on health care afterwards.”  In 2010, while still working for Cooperative Extension, Parker-Helmkamp earned her Master’s Degree from ECU, also in Health Education and Promotion.

Many of the programs and classes offered by Hertford County Cooperative Extension are integrated to include other agents based in the County office.  Over past few summers, Parker-Helmkamp has worked in conjunction with the Agriculture Agent, Wendy Burgess, and the EFNEP Agent, Gina Bonsu, to stage the Farm to Fork camp for local youth.  During the week long camp, children learn about local foods, cook healthy recipes, practice food safety best practices, visit local farms and farmers, and present the information they learned to the public.

Parker-Helmkamp has also been very instrumental in the planning process of the new Winton Farmer’s Market.

Dr. Travis Burke, Northeast District Director for the NC Cooperative Extension Service, introduced Parker-Helmkamp to the Hertford County Commissioners at their most recent Board meeting.

Dr. Burke remarked, “I wanted to officially introduce the new County Director for Hertford County, Stephanie Parker-Helmkamp.  She has been in the county for a while.  She is from this area, which is a good thing.  She’s going to do you a good job.  We certainly want to thank you all for supporting her and we want to welcome her here as the new County Director.”

Board Chairman, Curtis Freeman stated, “It is always go to see local people employed to serve in this county so I commend you and the staff for that and I’m sure she will do a wonderful job so welcome aboard.”

The previous Hertford County Extension Director was Crystal Smith who served in that role from 2010 to mid-September of 2013.