DURHAM – Miss Whitney Ann Pilson and Mr. Patrick Joseph Eibl were married on Saturday, August 10, 2013 at half past eleven in the morning at The Cotton Room in downtown Durham with the Reverend Thomas H. Caulkins, grandfather of the bride, officiating in a double ring ceremony. 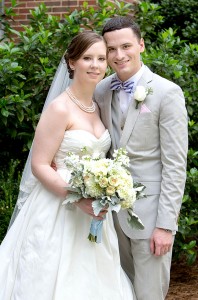 The bride was escorted down the aisle by her stepfather and met at the altar by her father. Families of the bride and groom also joined them at the altar for the declaration of support.

The bride adorned her candlelight taffeta empire waist dress with a cameo pin that had belonged to her great, great grandmother.

Rachel Revelle, cousin of the bride, of Winston-Salem served as maid of honor. Christopher Eibl, brother of the groom, of Chicago, IL, served as best man.

Thomas Revelle, cousin on the bride, of Carrboro, NC, TJ Hughes of Durham, and Arturo Sanchez, of Durham, served as ushers.

Master William Steele, nephew of the groom, was the ring bearer.

A reception, hosted by the bride’s parents, followed the ceremony, also at The Cotton Room.  On the eve of the wedding, the groom’s mother hosted a rehearsal dinner at the King’s Daughters Inn in Durham.

Following a honeymoon in Charlottesville, VA and Chicago, IL, the couple is residing in Durham.