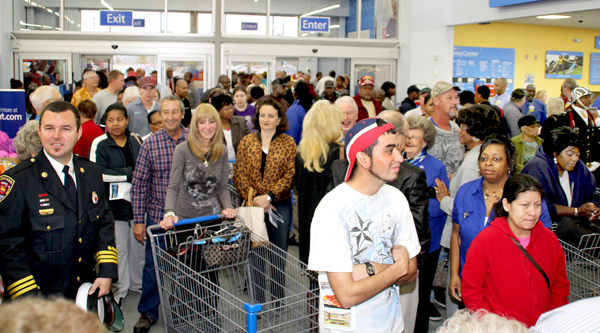 Wednesday morning’s crowd at the new Ahoskie Walmart Super Center patiently waits to shop until store manager Nnea Rapu and Marshall Cherry, President of the Ahoskie Chamber of Commerce Board of Directors, cut the ribbon to formally open the new store. Staff Photo by Cal Bryant

AHOSKIE – Judging by the number of cars in the parking lot and the throng of people inside, it appeared “Black Friday” arrived early this year in Ahoskie.

With the snip of a red ribbon, a sea of bodies, standing shoulder-to-shoulder, were set free to shop until they dropped here early Wednesday morning upon the opening of Walmart’s new SuperCenter.

When asked just prior to the grand opening if she was able to get any sleep Tuesday night, Rapu replied, “Very little.”

“When I got the word that a Super Walmart was coming to Ahoskie, I was just as happy as a kid at Christmas time,” Mobley said. “I knew this would be a boost to our little town and to our economy. We’re excited about this new store.

“I congratulate you and hope your stay here is long, and wish you success, so much to the point that you may see the need to expand,” Mobley added.

“Our town is growing and we hope with this new SuperCenter that Ahoskie will see even more growth,” Lassiter noted. “So many people have asked me what is coming…they said we already have a Walmart and now it’s just another one. Well it is and it isn’t. We had a standard Walmart, now we have a Super Walmart.

“We see Walmart as the anchor,” the Mayor continued. “We have seen in other communities where they have grown in the number of businesses at or near a Walmart SuperCenter. There are a number of possibilities, business-wise, coming to Ahoskie now that this new SuperCenter is open. We’re hoping that it won’t be too long that Ahoskie won’t just be a great town to live in, it will be a super town to live in. We thank Walmart for being here, for investing in our town. “

There is also a Subway sandwich shop located just inside the main entrance. A spokesperson for the existing Subway in the Ahoskie Commons Shopping Center said that location will remain open.

The new store also brings more jobs. Rapu said the old store, which closed Tuesday night, employed 130 associates. The new store will increase that to 236 employees, working in shifts (the store is open from 7 a.m. until 12 midnight, seven days a week).

As part of their grand opening, the Ahoskie Walmart will host a Big Family Welcome from 12 noon until 3 p.m. on Saturday, Oct. 26. That event will give customers a chance to meet Rapu and enjoy fun family activities such as face painting, cupcake decorating and free food samples while supplies last.

MERRY HILL – They’re still talking trash. Several citizens, including quite a few who spoke at the Oct. 10 public... read more