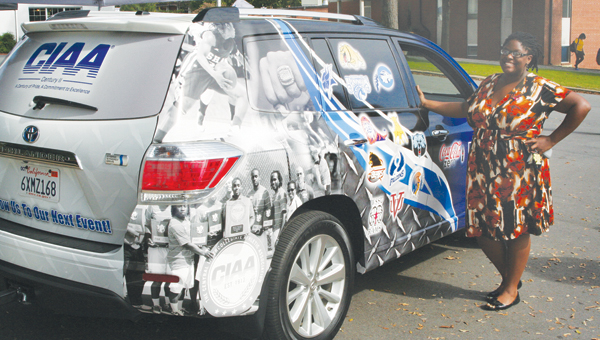 Chowan University Director of Student Life Leah Lambson poses beside the CIAA-Mobile on campus last week. The vehicle is adorned with the logos of all 12 CIAA schools. Staff Photo by Gene Motley

MURFREESBORO – You could call it “Blue goes Green.”

The CIAA (Central Intercollegiate Athletic Association) Mobile Marketing Tour and Toyota Green Initiative visited Chowan University last week as part of a tour of all the CIAA schools and instead of the blue in their sweatshirts, caps and other Hawks paraphernalia, students got a crash course in helping keep Mother Earth green.

The 13-stop tour began in Elizabeth City last month and is scheduled to visit every CIAA school and also appeared at –pre-selected CIAA rivalry football games this past weekend when Bowie State played Virginia State in Ettrick, VA outside Petersburg.

The fall tour will wrap up at the CIAA Football Championship game on November 16 at Bowman Gray Stadium in Winston-Salem.

Toyota, one of the league’s corporate sponsors, is offering students around the conference the opportunity to improve sustainability on their campuses with the newly launched Toyota Green Initiative (TGI) Green Contest.  One contest Grand Prize Winner will receive a one-year lease of a 2011 Toyota Prius and a TreePark for their HBCU campus.

On Wednesday and Thursday of last week, the Tour set up beside the student center – “The Hawks Nest” – and featured music, interactive activities and giveaways as part of the event.

“We’re driving around in a hybrid vehicle so that shows that we have a ‘green mentality’ to try and show how we’re improving our lifestyle,” said Chris Griffin about the Tour. “We use this to try and explain how to live better and improve the Earth.”

The Tour, now in its eighth year, also has a winter version that brings the same message to Charlotte in February for the CIAA Basketball Tournament.

“It’s been great,” continued Griffin. “Everyone has been really receptive to seeing us and always ask if we’re coming back. We hope it’s something that we can continue.”

“I think people have an interest in wanting to be more environmentally friendly,” said Kareem George with the Green Initiative. “I think we live closer to ‘the root’, but we’ve kind of gotten away from that. Now negative environmental policies are affecting everyone.

“When we think about the environment it’s the air, the water, the food going in you,” he continued. “And a lot of these communities aren’t getting the proper environmental education so they can live that sustainable lifestyle and they can do a lot of things that can lower those instances of health problems that persist in our poorer communities.”

At each tour stop, the CIAA Mobile Tour will offer students, alumni and fans the chance to learn more about the conference and enter to win giveaways, including tickets to upcoming CIAA events.

The Green Initiative also offers fans the opportunity to learn a variety of ways to make sustainable changes in their lifestyles, including recycling, energy use and more.

“As people sit on the bikes it generates energy allowing them to charge their cell –phones, their computers and tablets,” said Griffin. “They stop by and their phone battery is dying they can just plug it in, hop on a bike, and charge it up.

“There’s a battery inside the box,” he added. “As you pedal the cycling charges the battery, which in turn re-charges the phone.”

Finally, Toyota has a Green Campus Contest, which encourages students to sign the Toyota Green Promise and make sustainable changes on their own college campuses. Former winners have launched recycling programs, planted trees and more.

“It’s nice to be a part of a marketing program that’s not just about selling but something that college students can engage with,” concluded George. “It’s great to show them how they can contribute to the environment.”

Getting tough on back taxes

JACKSON – If you are in arrears on paying property tax in Northampton County, be forewarned that there may be... read more