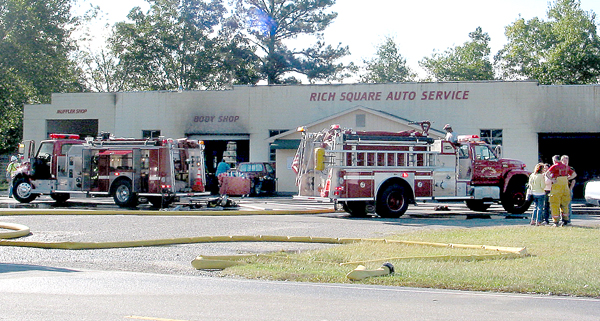 RICH SQUARE – It hasn’t been a good week for Greg Best.

Best, the owner/operator of Rich Square Auto Service on East Jackson Street, was the victim of a break-in on Sunday where several thousand dollars worth of tools and equipment was stolen from the business.

Rich Square Fire Chief Johnathan Morris said the fire was reported at around 8:20 a.m. The Rich Square Volunteer Fire Department rushed three units and 10 men to the scene. Among the RSVFD firefighters was Greg Best, a member of that organization.

RSVFD was assisted by units and manpower from the Woodland and Lasker volunteer fire departments.

Morris said firefighters cleared the scene shortly before 12 noon. The cause of the fire is unknown at this time.

The cement building was saved. However, Morris said there were a few places in the roof that burned completely through.

Morris said there was water damage to items in the building.

“It’s an understatement to say that Greg has had a tough week,” said Rich Square Police Chief Bo Roye, adding that he continues to investigate Sunday’s break-in and larceny. “It’s a shame to work so hard like Greg does to keep his business open to serve the citizens of our small town, and then be victimized by a break-in and then a fire.”

JACKSON – Northampton County Public Schools will have to wait just a bit longer to collect over $100,000 from the... read more