Mr. and Mrs. Melvin Vaughan of Ahoskie announce the engagement of their daughter, Titichia Tychell Mitchell, to Joshua Alexander Jackson, son of Henry and Adrienne Jackson of Ahoskie. The future bride graduated from Fayetteville State University with two BA degrees – English and Political Science – and a Masters of Art degree in English. She also graduated from the North Carolina Central University School of Law with a Juris Doctor degree and is employed as a Legal Education Advisor with BARBRI, Inc. She is the granddaughter of Mr. and Mrs. Reuben Dempsey of Ahoskie, and Howard Vaughan of Murfreesboro. The future groom is a veteran of the United States Armed Forces. He served two tours of duty in Iraq and was honorably discharged in 2007. He is currently pursuing a BA degree in Criminal Justice. He is the grandson of Mr. and Mrs. Henry Lavan of Queens, NY, and Julia Goddard of Ahoskie. A November wedding is planned in Wallace, NC. 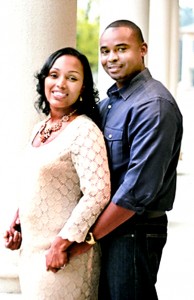