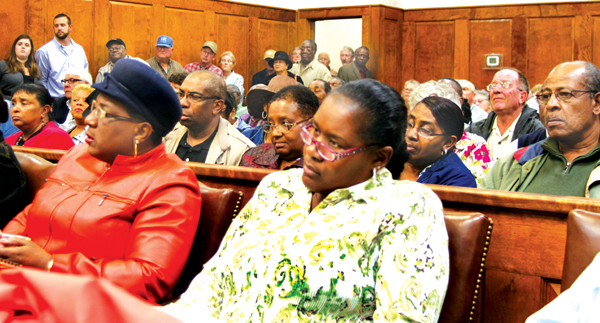 A crowd packs a Bertie County Courtroom on Thursday at a public hearing dealing with a proposed countywide curbside collection of solid waste. Staff Photo by Gene Motley

WINDSOR – More than two hundred persons crowded into the second floor Courtroom-One here Thursday night for a public hearing by the Bertie County Board of Commissioners to gauge opinion and receive citizen input regarding the proposed Curbside Solid Waste and Recycling Program.

The Board has yet to decide whether to close the county’s five drop-off convenience sites in favor of door-to-door curbside pick-up countywide of household solid waste.

A Fact Sheet was distributed to those who attended which outlined the proposal.

The fee would be locked in for five years and assessed with property taxes on “improved properties” in the unincorporated areas of Bertie County.

There would be exemptions such as properties with no electrical service and seasonal or vacation homes occupied less than three months a year.

The curbside service would include weekly pick-up of household garbage and recycling pickup every other week.

Waste Industries representatives were present at the public hearing and brought along for display and inspection the 96 gallon rollout lidded trash cart along with the 18 gallon open-top recycling bin. One of each would be provided to each customer at no charge with additional carts and bins available for purchase from the vendor.

White goods, like appliances (refrigerators), bulk items (mattresses), and E-Waste (TV’s, computers) could be picked up curbside once a month on a call-in basis.

Also, if special assistance is required for those unable to put the cart or bin by the curbside, then as long as there was ingress or egress of no more than 250 feet, “back-door” service would be provided. However, this would require a doctor’s note provided to the vendor on an annual basis.

“I’ve been asked (several) times since I’ve been here if this is a done deal,” said Commission Chairman J. Wallace Perry. “Let me assure you this is not a done deal; no decision has been made to accept or reject this proposal.”

Perry, who was interrupted several times by smatterings of applause from the crowd, went on to point out that the operating cost for the current drop-off sites is $487,000 a year in the county budget and that there have been requests for more convenience sites because of the driving distance to the current locations.

“A big reason we started looking at curbside is because if we have to put in two more drop-off centers it would be tough on our budget in the neighborhood of $700,000,” continued Perry.

Speakers were allowed to make a three-minute statement and 33 attendees took advantage.

Willie Outlaw of Powellsville, the first speaker, was one of many who opposed the curbside pick-up proposal.

“I don’t have a problem going to the trash sites,” Outlaw said. “My problem is the ones that want it; you shouldn’t punish everybody because certain people want it, and certain people don’t.”

Commissioner Ron Wesson, one of the three board members who have worked closely on the proposal, answered several questions asked by citizens.

“We have some citizens driving 15, 16 miles each way to recycle, and many of those sites are not on their way,” said Wesson.

Wesson pointed out that as part of his research he visited a site early in the process and questioned some users.

“The average citizen is spending about $2.62 a week (to take) their garbage and somebody who lives further away spends a lot more than that,” he continued. “The price of this (pick-up) service is $2.40 (per week), so it is cheaper for the average citizen.

“It costs us about $500,000 to run the centers,” he added. “So if we can save that money and give you something that is cheaper for the average person and a better service, those are some of the advantages.”

Wesson admitted there were disadvantages and he also addressed the current drop off system. While he complimented workers at the sites, he claimed they work minimum wage jobs at no more than 20 hours per week and that there are no benefits. The curbside pick-up jobs would pay from $12-to-$16 per hour working on the garbage trucks and would included full benefits.

“And there would be more of them, based on the number of trucks needed to service Bertie County than we have now,” he concluded. “So if you look at the trade-offs: better jobs, better pay, benefits, and more of them.”

Joe Hoggard of San Souci brought along his own statistics to support his opposition to curbside pick-up; disputing cost amounts for garbage drop-off.

“This system has worked flawlessly for 30 years,” he said. “We argued 10 years or more about building a high school because we didn’t want to raise the (tax) rate 6 or 7 cents, but now we’re willing to raise the rate 8 cents to pick up garbage beside the road,” he added. “That don’t seem like logical thinking to me; why would we change that with the increased cost?”

“We have a beautiful county,” said Lucille Phelps. “A farmer said to me ‘I’ve been dodging mailboxes on my tractor, now I have to dodge trash-cans too.’, so we need to think about the safety.”

Some of the assembled asked if the final decision could be put to a referendum, but county attorney Lloyd Smith pointed out that only the state legislature could approve a referendum.

There were some in the audience that defended curbside pick-up, including Sandra Hardy.

“We’re not giving this a chance,” she implored. “Let’s support ideas and support each other.”

“We are the taxpayers,” said Jerry Bowen. “Why can’t we pay for what we want?”

Coleman Holley, who said he provides a private trash hauling service, used his time to explain what he could do.

“I charge a reasonable amount of about 15 to 20 bucks,” Holley said, as he waved around the room. “But if I could get all of y’all, I’d be able to just charge 10,” he said as the crowd erupted with laughter and applause.

Afterward, Chairman Perry closed the public hearing and the other Commissioners made clear their current positions.

“I’m elected by the people, and I will do what you want,” said Commissioner Rick Harrell. “It doesn’t matter what I think. The process of allowing everybody to come together and talk about this issue is the way it should be done.”

“I’ve spoken to 77 households in west Bertie County,” said Commissioner John Trent.  “And 75 of them said this is something we need; but we want to make this fair for everybody.”

Commissioner Perry adjourned the public hearing and had the final words.

“We’re going to make the decision that’s best for the county,” Perry said. “I live (close) to a dump site, but I feel for the man who lives 16 miles away because we’re going to have to do something to help him.

“Pray that we make the right decision,” he concluded. “Because that’s what I want to do.”