POWELLSVILLE – Of all the awards filling the home of Estella Hall Simons, she will gladly make room for one additional trophy.

That was the case recently when the 96-year-old Simons did indeed proudly add another shiny piece of hardware to her growing collection….this particular one creating a larger smile on her typically jovial face. 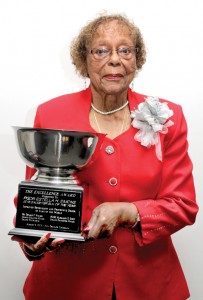 Estella Simons proudly displays the Elk of the Year Award she received at the 2013 Grand Lodge Convention of the IBPO of Elks of the World held in New Orleans. Staff Photo by Cal Bryant

“I’ve waited for this one for a while; I’m happy to add it to the others,” Simons grinned as she showed off the 2013 Elk of the Year award she earned during this year’s Grand Lodge Convention of the IBPO of Elks of the World held in New Orleans.

For those unaware, the Elk of the Year Award (aka the Excellent Award Cup) is the highest honor one can receive in Elkdom.

“I didn’t join the Elks for the recognition; I joined to let them use me for the good of the community in which I live,” Simons said.

Her membership within the organization dates back 50 years. Over that period of time she has held the positions of Daughter Ruler, Vice Daughter Ruler, Chaplin and Trustee at Eureka Temple #521 of Ahoskie. She has chaired numerous projects to support the endeavors of the Temple.

Additionally she served as Loyal Daughter Ruler for the Tri-County Council and is presenting serving that group as a Trustee.

For 34 of her 50 years as an Elk, Simons served as president of her Temple’s Educational Fez Club. While she no longer serves in that role, she remains an integral part of an effort to annually recruit contestants for the annual Oratorical Contest.

Simons has also served as the Regional Directress of Education for many, many years; held the position of secretary for over 30 years for the District 2 Elks; and presently serves as treasurer for the PGDR (Past Grand Daughter Rulers) Circle.

Simoms also plays a leadership role in her home county (Bertie). There she is a member of the Bertie County Concerned Citizens, Lay Advisor for Breast Cancer, Chairperson of the Colerain II Precinct of the Democratic Party, past President for the Bertie County Alumni Chapter of Elizabeth City State University, and is an active member of the Ahoskie Alumni Chapter of Delta Sigma Theta Sorority, an organization she formerly served as president.

As the oldest member of Piney Wood Chapel Baptist Church, Simons remains active there as well, serving as the Chairperson of the Deaconess Ministry, and Director of Vacation Bible School. She previously served 17 years as President of the Senior Choir, 15 years as Sunday School secretary, and was an usher for many years.

“I enjoy working in my church,” she said.

When asked what’s next for a woman who is only four years shy of celebrating a 100th birthday, Simons once again flashed her trademark grin and replied, “There’s always room for another trophy.”

Chowan’s Anthony Clanton finishes off a 12-yard run by diving into the endzone for the Hawks first TD vs. Shaw.... read more