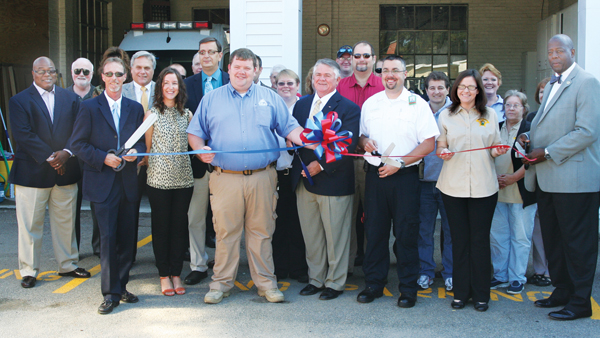 AULANDER – The historic first 911 call was answered by Colerain: a minor accident of a car rear-ending a school bus. Thankfully, no one was injured; but in answering that call on Cremo Road Tuesday morning, First Med Emergency Services had made its debut as the full-time EMS provider in Bertie County.

Later that morning in Aulander at the old Rescue Squad building across from the town’s Community Building there was a dedication and ribbon-cutting to ceremoniously and symbolically welcome First Med to the county. The affair was attended by a host of Bertie dignitaries to mark the special beginning.

The private ambulance service began operations at midnight on Oct. 1. Bertie is the only county in the entire state of North Carolina that has gone to a privatized ambulance service. Eight certified EMT’s will be staffed between three locations, as Lewiston-Woodville’s rescue service will now come through Aulander.

“We feel real good because it’s been a long road and a long time coming,” said Bertie County Emergency Management Services Director Mitch Cooper at the ribbon-cutting. “The citizens and everybody have been real supportive for us and I feel real comfortable that they will provide and carry on the tradition of what’s been carried in Bertie County as far EMS to provide for our citizens and take care of our families here.”

Paramedic certification, not just on the state level, but also as set forth by First Med’s own standards, was completed for all of the employees by Monday midnight, making for a smooth transition.

Director of Operations for Bertie County, Matt Leicester, held meetings with all staffers almost up to the final hour on Monday. Tuesday morning greeted him following a night of anticipation.

The six-plus hour wait from midnight until the first call came in had the EMT’s on edge. Most of that nervous energy turned to positive energy once dispatchers from the 911 center began to route calls.

“We kind of sat around and waited for it for a little while; it took a little longer than we expected to get here so there was a lot of build-up, a lot of anticipation,” Leicester added. “But once it got here it went from all the preparation, all the planning, to doing what we’ve all been trained to do and put that into action and that’s the easy part for us.”

Leicester and his EMT’s also used the morning’s dedication to show off the First Med equipment.

“It’s sort of getting back to normal,” he said with a smile. “We’ve already had a few calls this morning, two in Windsor, so we’ve gotten to jump in right off the bat and that’s a good start.”

“I know a lot of calls they’re going to be receiving could be dangerous calls, but we’ve talked with (First Med) and we reassured them that if something like that happens we’d have deputies out there to assist them in any way we can,” the sheriff added.

When 911 calls come in to the Bertie Sheriff’s Office Communications Center the telecommunicator will then make simultaneous contact with First Med as well as sheriff’s deputies by computer-aided dispatch (CAD) as rescuers proceed to the call.

“If it’s a bad call, like someone’s been shot then they would contact my deputies and we would meet them at the scene,” said Holley.

Bertie County Commissioner John Trent, who helped make First Med’s presence possible in the county, was on hand for the grand opening.

“It feels wonderful to have them here,” Trent said. “The transition went great, the dispatch, the ambulance service, the EMS, everything worked out smoothly.”

First Med’s presence within the town limits of Colerain, Windsor, and Aulander mean their response time in those areas particularly will be greatly accelerated.

“It’s very gratifying to know that all of our citizens of our town are within one-half mile of this location,” said Aulander Mayor Larry Drew. “It’ll be the quickest response we’ve ever had and we’re extremely grateful to the county from providing this to us.”

Drew pointed out that other communities in the county could anticipate just as quick a response.

“We want to make them understand that the service is available to them as well,” Drew said.

Aulander Volunteer Rescue Squad, before they ceased, made many of the renovations to the rescue building which First Med will staff on a 24-hour, 7-days-a-week, and 365 day-a-year basis.

“We kept a memorial on the wall to them and all the services they provided because they were the second oldest volunteer squad in the state of North Carolina when it was formed,” Drew stated. “They provided excellent service for all those many years and we’re very grateful to them for all their services.”

“We used to sell plates and apple-jacks and the like because the county only gave us $12,000 for insurance, and all the other money we had to fund-raise to keep it going,” Jones-Sexton declared. “I’m glad to know now that things will be better taken care of.” 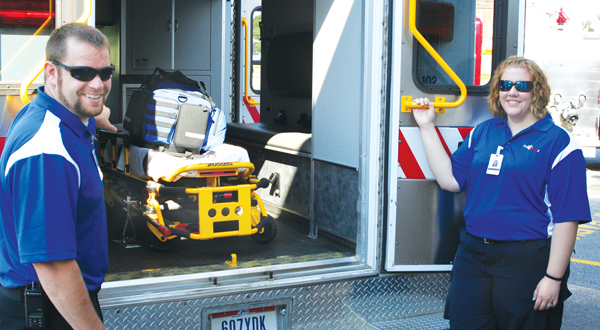 By Caroline Stephenson Correspondent WINTON – Approved. At the most recent meeting of the Hertford County Board of Commissioners, they... read more