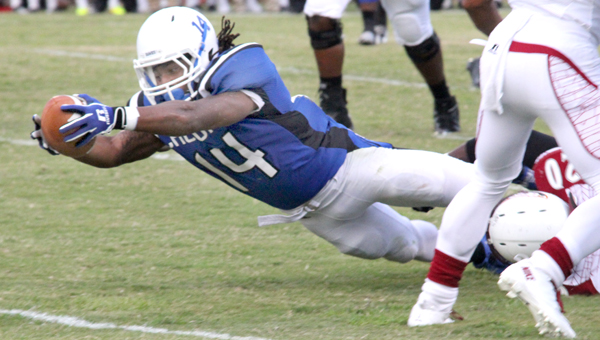 Chowan’s Anthony Clanton finishes off a 12-yard run by diving into the endzone for the Hawks first TD vs. Shaw. Staff Photo by Cal Bryant

Chowan football coach Tim Place advocates that you must win two of those three phases of the game to be successful.

The trio had been pretty much inconsistent for the Hawks in their first three games, but Saturday night at Garrison Stadium they all stepped up when needed.

That effort helped produce a 29-23 come-from-behind win for Chowan over Shaw University in the Central Intercollegiate Athletic Association (CIAA) opener for both teams.

Quarterback Cameron Stover connected with wide receiver Antjuan Randall in the end zone with 23 seconds left followed by a fake of the point-after kick that Ryan Simpson ran in for a two-point conversion. Chowan’s defense then snuffed out any threat of a comeback as Bear quarterback Quinshon Odom took two long shots at the end zone — and a delay of game penalty — to close out the game and the six-point Hawks win.

“We needed this,” said the sixth-year coach, breathlessly, as he celebrated with his team on the field after the game. “I’m extremely proud of everyone in the program.”

“We’ve lost a few like this a couple of times,” he added. “Tonight, our whole program needed a win like this; we needed everyone to step up.”

Shaw got on the scoreboard first.  After the defense held Chowan to a single yard on their first drive, the Bears took over on their own 29 and later Odom hit Ta’Juan Brown for a 60-yard scoring strike.  Shaw missed the PAT but led it 6-0.

Back came Chowan on their next possession, a six play 69 yard drive which ended with a 12 yard rush by Anthony Clanton to knot the score at 6.  Alex Noboa‘s point after attempt was good, allowing the Hawks to grab a 7-6 lead that held thru the first quarter.

On their first drive of the second quarter Shaw unleashed the CIAA’s leading rusher in Marquise Grizzle and the former Currituck County runner had three carries before bulling his way into the end zone to give the lead back to the Bears. That score held thru the quarter as both teams suffered turnovers and it was 13-7 at halftime.

The second half opened with Chowan’s Willie Hickman snagging an Odom pass and setting up the Hawks at the Shaw 34-yard line. After a short gain Stover broke one on a quarterback keeper for 20 yards down to the ten-yard line and two plays later DeSean Martin went in from four yards out and Noboa’s kick had Chowan back in the lead, 14-13.

With their next drive Chowan went up by two scores as a roughing the passer penalty moved the ball to the six-yard line where Stover hit the ever-reliable Robert Holland  on an out-route for another score and the PAT had the Hawks up, 21-13.

Shaw would rally, though their drive stalled at the Chowan 23, Andres Magallon hit a 41-yard field goal to trim the Hawks’ lead to 21-16.

Stover was then intercepted and Shaw took advantage, going 68 yards in 11 plays with the key play being a 51-yard bomb from Odom to a wide-open Dave Jordan. The point-after kick produced a 23-21 Shaw advantage at the end of the quarter.

Chowan’s first fourth quarter drive stalled at midfield and Stover was intercepted again on the next one. Meanwhile, Shaw twice got inside the Chowan 35, but could not convert it to points.

Chowan’s third drive began at the four-yard line and though it stalled, it contained a pivotal play that might have defined the game.  Shaw had Clanton tackled inside the ten, but he broke free on a pass from Stover and took it to the Chowan 26 and out of the shadow of the Chowan goal post.

After Matt Lucas’ fourth punt of the game Shaw started from their own 24 and only gained two yards on three plays before punting the ball back to Chowan.

Here’s where the Hawk special teams stepped up, as Randall returned the ball to near midfield at the Shaw 46 with 2:43 left to play.

Stover connected first with Holland on a 16-yarder, then carved up more yardage with a toss to Damian Ellis for five more. After a rushing play lost a yard and Stover was sacked for a loss of nine more, the Michigan native made the biggest pass of the game – to that point – when he found Ellis again for 19 yards down to the Shaw 16, easily putting the Hawks well within Noboa’s field goal range.

But it was the next play that became the stuff of legend as Randall and the Shaw defender, Darnell Evans, were both going for the ball, but Randall was able to grasp it, and held on as he fell back into the end zone and the Chowan crowd erupted in chaos. It looked like the Hawks would go for one, but the ball was hiked to Simpson, who dove it for some six points worth of insurance.

“I ran my route, he threw deep, and we pulled one out,” said a grinning Randall surrounded by press members on the field after the game. “We got away with one.”

“We were looking to score, not just kick the field goal,” said Stover. “This just shows what these guys are made of: hard work and it pays off.”

After participating in three blowouts to open the season, Chowan found themselves in a tight contest.

“It helps the young guys,” said defensive end TJ Batchelor. “This is how you win with integrity and perseverance.”

Chowan (2-2, 1-0, CIAA) heads to Jeralds Stadium in Fayetteville next Saturday to meet the FSU Broncos in a 4 p.m. contest. Shaw (2-2, 0-1, CIAA) will host VirginiaState at Durham County Stadium.