“John Hora was a valued member of our Board of County Commissioners, serving with distinction and representing the Eure District of Gates County. Our thoughts and prayers are with the family in this time of mourning,” said Mendenhall.

On Monday, the Gates County Board of Commissioners issued a joint statement regarding the sudden loss of their friend and colleague.

“The Gates County Board of Commissioners would like to express our deep sympathy and sadness at the loss of Commissioner John Hora,” they stated. “Our hearts and prayers go out to his wife Betty, his children, grandchildren, family, and friends.

“John Hora was a valuable member of the Gates County Board of Commissioners; his expertise in finance, experience in business matters, knowledge of County Government, and political strategies to accomplish the best for GatesCounty will be greatly missed.  It is with great admiration and the upmost respect that we acknowledge to his family and all citizens of the county that John Hora was an outstanding County Commissioner and an example for others to follow,” the joint release concluded.

Hora was also a valued member of the Gates County Department of Social Services Board. Geoffrey C. Marett, the county’s DSS Director, was like everyone else, still in shock over the tragic loss of a man well-respected by his peers.

“It was with deep sadness that members of the Gates County Department of Social Services staff and Gates County Department of Social Services Board learned of the car accident involving John Hora on Thursday afternoon and of his untimely passing on Saturday morning,” Marett said. “Our thoughts and prayers are with his beloved wife Betty, his children, grandchildren, and the entire family during this time of mourning.

Marett closed by saying, “John’s compassion, practicality, knowledge, empathy and most of all his friendship will truly be missed by those who served with him on the Gates County Department of Social Services Board and by those who worked with him at and through the Gates County Department of Social Services. It is without a doubt that GatesCounty and its citizens have lost a truly remarkable man.”

The accident that eventually claimed Hora’s life occurred shortly past 1 p.m. Thursday near the intersection of NC 137 and Turner Road, west of Gatesville. Hora was airlifted from the accident scene and flown to Sentara Norfolk General Hospital.

According to a report filed by North Carolina Highway Patrol Trooper K.R. Genao, Hora was operating a 1998 Ford truck east on NC 137 where his vehicle apparently traveled off the right side of the roadway. Genao said that upon steering the vehicle back onto the eastbound lane, Hora overcorrected, causing him to lose control. At that time, Hora’s truck flipped at least three times. He was not wearing a seatbelt, according to Genao’s report, and was ejected from the vehicle.

Prior to his untimely death, the 65-year-old Hora was in the third year of his term on the board of commissioners, entering the world of politics and winning his first-ever election in 2010. He was retired as comptroller at Union Camp/International Paper in Franklin, VA after nearly 40 years on the job.

Hora, a native of Bertie County, was also active in the faith-based community at Eure Christian Church. There he served on the Board of Deacons, was the church treasurer, and a member of the Men’s Layman Fellowship.

Graveside funeral services will be held Tuesday at 3 p.m. at the family plot in the Eure Christian Church Cemetery. 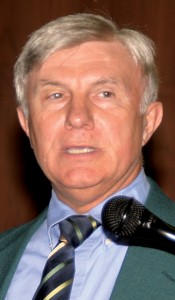 Dr. Michael Elam (second from left) was the center of attention on Tuesday during a reception held in his honor... read more