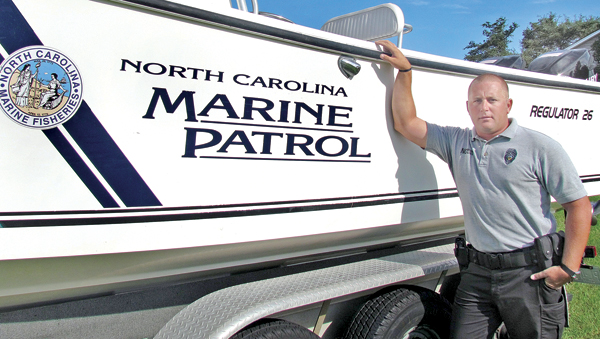 Marine Patrol Officer Chris Lee is shown here with the 26-foot Regulator patrol boat that piqued his interest years ago. Lee, a Colerain native, was recently named as the 2012 Marine Fisheries Enforcement Officer of the Year. Photo courtesy of Division of Marine Fisheries

Lee, 31, was nominated for the honor by fellow officers in his district.

“Chris has a genuine desire to make sure that our marine resources are protected,” said Sgt. Brian Long, Lee’s supervisor. “He’s very proactive. He’s always one of the first ones to stand up and volunteer, even if it’s a duty that is less than desirable.”

According to his fellow officers, Lee has a knack for searching out and finding significant fisheries violations.

“He keys in on things quicker when he knows something is not right,” Long said.

Lee has made significant cases involving the illegal use of gill nets, illegal sales of seafood, unlicensed charter boats, and larceny of commercial fishing gear.  He has also participated in undercover operations ranging from the illegal sale of seafood to the recreational taking of undersized and over-the-limit of red drum and spotted sea trout.

Lee attributes his talent for finding violations to his childhood experiences. Originally from Colerain, Lee grew up the son of a deputy sheriff. He spent countless hours fishing in the Chowan River for white perch, catfish and striped bass and saw the once thriving river herring industry when it was in its prime. In his free time, he helped his best friend’s father fish pound nets, crab pots and gill nets. It was during a family vacation to Kill Devil Hills, that Lee first spotted a N.C. Marine Patrol 26-foot Regulator patrol boat moored nearby.

“That was the first time I’d ever heard of Marine Patrol,” said Lee, who was 17 at the time.

The boat piqued his interested and caused him to begin researching what Marine Patrol officers do. Little did he know that years later he would patrol that same area in that same patrol boat.

Lee joined the Marine Patrol since 2008. Prior to that, he served in the N.C. National Guard in Operation Iraqi Freedom, and later joined the Edenton Police Department.

During his military service, Lee began working toward a degree in criminal justice that he would later complete after joining the Marine Patrol. He is certified as a general instructor and specialized firearms instructor through the N.C. Criminal Justice and Training Standards Commission. He is also certified as an Armament Systems and Procedures baton and handcuff instructor and a CPR, first aid and automated external defibrillator instructor. He is field trainer for newly hired officers.

Lee, a graduate of Bertie High School, lives in Kill Devil Hills with his wife, Melissa, and son, Sonny. He is the son of Vernon and Tammy Lee of Colerain.