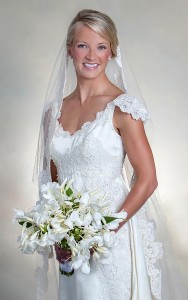 The bride was escorted by her father and wore her mother’s wedding dress.

Mrs. Anne Futrell Farless of Merry Hill served as the matron of honor.  Maid of honor was Miss Anne Catherine McLean, cousin of the bride, of Fayetteville.

The Mistresses of Ceremonies were Mrs. Sallie Lewis Futrell, and Ms. Marsha Mustain Beasley, of Jackson.

The groom is a graduate of Virginia Episcopal School and North Carolina State University where he received his Bachelor of Science degree in Agricultural Business Management.

A reception, hosted by the bride’s parents, was held at the home of the bride following the ceremony.  On the eve of the wedding, the groom’s parents and family friends hosted a rehearsal dinner and dance at Colerain Beach in Colerain.

Following a honeymoon to the Turks and Caicos, the couple will reside in Colerain.