There’s a first time for everything.

At the age of 14, Willie C. Cordy III recently experienced his first-ever train ride, out-of-state competition, trip onboard a commercial jet, hotel accommodations, and showing a passport for overseas travel.

The grandson of Bernette Cooper Jordan of Winton returned stateside with a small piece of added luggage – a silver medal at a worldwide competition, as well as memories to last a lifetime. 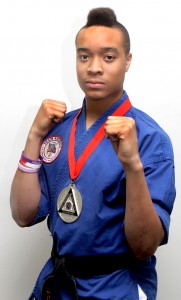 Willie Cordy III strikes his fighting stance, one used during an international tournament staged by the World Organization of Martial Arts in Dublin, Ireland. Staff Photo by Cal Bryant

Willie III, the son of Willie C. Cordy Jr. – a 1985 graduate of Gates County High School now residing in Portsmouth, VA – was chosen for a spot on Team America, a group of teens who took part in an international competition last month in Dublin, Ireland. There, the high school freshman, despite being tossed a “curve ball” in the style of competition held at a tournament hosted by the World Organization of Martial Arts, advanced through the bracket and made it to the gold medal round where he was defeated by a member of the Ireland National Team.

“Normally we do point sparring in the matches; over there it was full contact continuous, more like an old-style kick-boxing match,” said Cordy Jr. “You’re still scored on a point system, but it leans more towards which of the two competitors does a better job of dominating the round.”

“They don’t stop it; it’s 90 seconds of non-stop action,” said Cordy III, who competed in the age 12-14 Black Belt Division.

Despite being unaccustomed to this type of competition, Cordy III won his first two matches – the elimination rounds – over members of the Wales National Team.

“While they were the competition, we had a really good time meeting and becoming friends with the members of the Wales team,” said Cordy Jr. “To me, having your son involved in competition is one thing, but watching him build friendship with others was very pleasing to me.”

In the championship match, Cordy III met a member of the “home team” from Ireland.

“We came away with the silver medal instead of gold, but for him to make it that far was amazing, especially considering this was his first time competing at the full contact continuous style,” said a proud father.

“I was kind of nervous knowing about the (full contact continuous) style I would use,” said Cordy III. “It was my first time of fighting that style, but I was able to learn a lot. You use a lot more energy in this style.”

“In sparring, you get a brief break while the judges stop the action to award points,” noted Cordy Jr. “Full contact continuous is exactly how it sounds…..you go hard for 90 full seconds.”

In preparation for the World games, Cordy III trained for three-minute rounds.

“You don’t know until you get into the tournament what the format will be,” Cordy Jr. said. “We got some of the rules before arriving in Ireland; others were not handed out until we got there. I was proud of the way my son performed, but more importantly proud of the way he carried himself. The guy he lost to in the gold medal round is now one of Willie’s Facebook friends. They stay in touch.”

Cordy III tuned up for the international event by competing in the State Games of America, held Aug. 1-4 in Pennsylvania. There, as an individual competitor among nearly 10,000 combatants, he won two silver medals before joining up with his Team America comrades and boarding a jet on Aug. 7 bound for Dublin.

Father and son were in Ireland for nine days.

“The weather was great over there….it felt like fall,” said Cordy Jr. “We came back home to the typical hot and humid weather. It made me wish we were back in Ireland.”

Outside of the competition, father and son were able to spend time together visiting a foreign country for the first time. They toured the Cliffs of Moher, St. Patrick’s Castle, Trinity College in Dublin where they viewed the Book of Kells (containing the four Gospels of the New Testament created by Celtic monks ca. 800 or slightly earlier), and to the famous Blarney Stone.

“We took well over 2,000 photos and shot about 200 videos while in Ireland,” Cordy Jr. said. “We had a great time. Wish we could have stayed longer just visiting the beautiful countryside.”

For a man who has lived in Manhattan, Cordy Jr. said Dublin reminded him of that famous part of New York City.

“Believe it or not, but I thought Dublin was busier than New York,” he said. “The drivers there are off the chain. Pedestrians stand right to the edge of curb and the drivers zoom so close that you can feel the breeze they generate, and they do not slow down for you if you’re crossing the street.”

Now back at home, the father is studying what options are available for his son within the realm of martial arts.

“The AAU circuit, which leads to the Junior Olympics, looks the most intriguing,” noted Cordy Jr. “There’s an invitational tournament coming up in November in Richmond. We can get a spot in that, then by placing high in the final rankings we can move on to the District and then to the Super Regionals. If you win there, it’s on to the Nationals and the winners there move on to the Junior Olympics. That event is normally held in Texas or at Disney World in Florida.

“Some of the teams from other parts of the United States are interested in Willie joining them as well; that’s something we’ll look in to,” the father boasted. “We’ve (the team) been invited back to the World Games in Wales in 2015 and for tournaments in England and Canada.”

But no matter what path is taken, young Willie has learned a lot about life through his sport.

“It teaches you discipline first and foremost,” he said. “Building friendships is also important.”

That friendship was noted at the World Games.

“Teams exchange banners there and sign them for their friends from all over the world,” Cordy Jr. said. “The Irish team and the Wales team both gave us the flags of their countries. And one of the ladies who helped run the tournament mailed us a full-size flag of Ireland. I’m going to take a photo of Willie and the group of guys at our karate school and mail it to her.”

While the father was once a dominant force in the world of martial arts (he trained at the “Tai Chi Association” in Decatur, GA where he studied traditional Shaolin Kung Fu), the youngster started his training at the “Authentic School of Karate” under the Hunter family in May of 2003 in Portsmouth, VA.

Young Cordy earned four State Championship titles in 2012 at the Commonwealth Games of Virginia and the Virginia Karate Alliance 2012 circuit. The VKA awarded him with two Competitor of the Year plaques for 2012. Those two gold medals earned him a spot to represent Virginia in 2013 State Games of America Tournament in Hershey PA.

AHOSKIE – John Fritz never thought he’d be talking about the eradication of the deer population within the Ahoskie town... read more