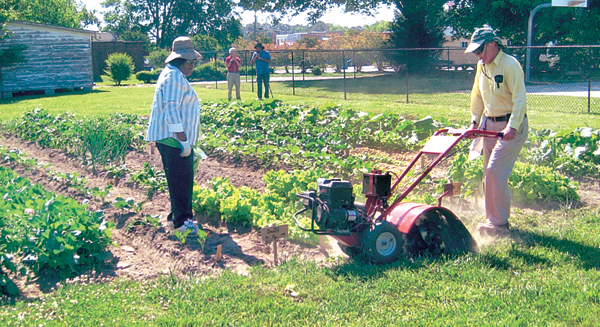 Clif Collins (right) is shown tilling the soil as a trainee of the Garden Ministry at Murfreesboro Baptist Church looks on. The Ministry is expanding its offerings following a successful 2013 growing season. Contributed Photo

That wise, old proverb will serve local citizens who choose to take part in a unique program offered by Murfreesboro Baptist Church.

In an effort to feed those in need while teaching them how to till the soil for future use, the church is broadening their current Garden Ministry for 2014.

Brinson Paul, a member of Murfreesboro Baptist, said the Garden Ministry began in the fall of 2012 where a 50 foot-by-50 foot plot of land owned by the church was designated to become a training garden for those needing assistance with providing food for their families.

“We recruited candidates for our first gardening class and began to prepare the land in the fall of last year so it would be ready when the planting season began this past spring,” Paul said.

He went on to say that each candidate was assigned an experienced gardener as a personal mentor. That mentor worked with the candidates during 2013 based on a promise made by the trainee that they would raise a garden at their home following the year of training.

“Each trainee was allowed to grow the vegetables they preferred on the garden rows they were assigned,” Paul said.

Those trainees worked with their mentors to plant such items as salad greens, cabbage, collards, spinach, lettuce and potatoes for early harvest. By the time Good Friday rolled around and the soil warmed up, the final rows containing peppers, tomatoes, squash and cucumbers were planted under the watchful eyes of the mentors.

“Our project was blessed with fertile soil and abundant rainfall, producing a bumper crop of delicious vegetables that continue to be harvested and enjoyed by the trainees,” Paul noted. “In addition to the bounty of the garden and the knowledge gained from the training, there has developed a lasting friendship among the trainees who have arranged to spend time together as they weed and harvest their rows.”

Now the Garden Ministry is shifting into another gear.

“While we plan to plant fall vegetables that will provide additional food on up until the end of this year when the current training program ends, we have decided to expand our Garden Ministry to 2014 and beyond,” Paul said.

One part of the new plan is that the mentors will be available to provide advice by telephone to their trainees as they plant and tend their home gardens next year.

Secondly, the Ministry will offer 100 linier feet of garden space to those who do not know how to manage a garden as well as those familiar with the process, but lack the space at home to do so.

“Since the land for the 2014 garden needs to be prepared later this year, it is necessary to enlist candidates now for those two new opportunities,” Paul said.

The deadline to apply for the assistance of the church’s Garden Ministry is Oct. 1. Those interested are encouraged to stop by the church, located on corner of Main Street and Liberty Street, and pick up an application. The church office is located at the rear of the Fellowship Hall and is open from 9 a.m. until 12 noon, Monday through Friday. Those making an application will be contacted by a member of the Garden Committee.

WINTON – First they were faced with dwindling funds due to Sequestration in their Head Start and Early Head Start... read more