The bride is the daughter of David and Pam Northcott of Colerain. 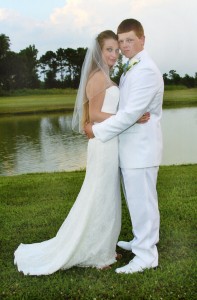 The groom is the son of Debbie Brinkley of Ahoskie, who hosted the wedding at her home.

Given in marriage by her father, the bride was accompanied at the alter by Anna Northcott of Colerain, who served as the Maid of Honor.

The flower girl was Jamison Slaughter, the daughter of Joe and Lisa Slaughter of Ahoskie.

Bryan White, cousin of the groom, served as the Best Man.

Dee Worrell was the Mistress of Ceremonies.

The wedding reception was held at the home of the groom’s mother.

After a wedding cruise to the Caribbean, the couple is residing in Union.

The bride is a graduate of Bethel Christian Academy and is currently enrolled in the Nursing program at Roanoke-Chowan Community College.

The groom is a graduate of Northeast Academy and the Wilson Community College Fire Protection Technology Program. He is currently employed with Hertford County Emergency Medical Services.

July 29 – a party was given by Lynette Jernigan.

Aug. 2 – rehearsal dinner given by the groom’s mother.

Aug. 3 – reception given by the parents of the bride.

Mr. and Mrs. Paul Lilley of Gatesville announce the engagement of their daughter, Rachel, to Travis Badgett, son of Mr.... read more