GATESVILLE – When Jay Greenwood first arrived in Gates County in 2003, his first major task was to pick up the pieces in the aftermath of Hurricane Isabel.

Merchants Millpond State Park and Gates County in general are both better off now, thanks in part to the efforts of this one-time stranger to the county who now boasts of raising a family here. 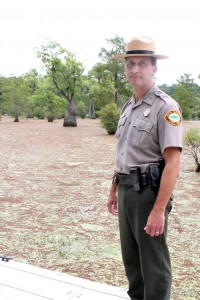 Effective last week, Greenwood is on the move from his job as Superintendent of that natural treasure known as Merchants Millpond. He has been promoted to Superintendent of the South District of North Carolina’s system of state parks. There he will oversee 11 parks, stretching from Raleigh, to Wilmington, to Charlotte. His office will be in Raleigh.

“I’ve learned the ropes over the past 17 years with our State Park System, now comes an opportunity to move up,” Greenwood said, sitting inside his nearly barren office, most everything packed away for the transfer. “I’ve spent time as a Park Ranger, as the lead Park Ranger – which oversees a park’s environmental education and a park’s resources – and then here to Gates County.

“I love Merchants Millpond; I love the staff here, the people here…it’s been a great experience for me,” he continued. “But there comes a time in your life when opportunity knocks and you can’t afford to pass it up as those doors do not open too often. There are only four positions in the state such as the one I’m taking.”

Greenwood may be leaving for a new job, but his family roots will remain in Gates County. His wife, Joy, will continue her job as Superintendent of the Dismal Swamp State Park. She and the couple’s three daughters – Molly (12), Lainey (8) and Lily (4) – will continue to reside in Gates County.

“We love it here; our kids are in school here,” he stressed. “There’s nothing better than living in a small town where everyone knows who you are and everybody looks out for you and your family. That’s someone Joy and I decided that we didn’t want to give up. I’ll make the commute; I’ll make the sacrifice. When I was working in Delaware you would have a 30-mile trip, but it would take two hours to get there because of all the traffic. Heck, I can drive from here to Raleigh in a little over two hours, it’s not all that bad.”

Jay and Joy first met while both were working at Goose CreekState Park in BeaufortCounty.

“I came to North Carolina 17 years ago, hired as a Park Ranger at Goose Creek,” said Greenwood, a graduate of Delaware State University with a degree in Wildlife Biology. “Ten years ago I was promoted to Superintendent here at Merchants Millpond.”

“I’ve always had a love for the outdoors,” Greenwood said. “We hunted and fished all the time while growing up there. I decided to go into this career field based on advice my mom and dad gave me earlier in life – find a job you like because you’ll be working the rest of your life.”

He landed that dream job on his first visit to North Carolina. Greenwood was at the Department of Natural Resources in Raleigh where the Human Resource Officer showed him a chalkboard of available Wildlife jobs across the state.

“She told me that Goose Creek would be a great position to start…..well, that was that,” he recalled.

Among the pluses Greenwood found in working within the State Park System was meeting the public.

“We’re so service oriented,” he said. “You get the opportunity to meet and talk with different people and most of our interaction with the public is positive. I love it.”

Another plus for Greenwood while serving in the lead role at Merchants Millpond was the construction and opening of the new Visitors Center. That came in October of 2009.

“The Center adds to the beauty of the millpond and serves us and the public well as we tell the story of Merchants Millpond,” he noted. “This millpond is so unique….it’s unbelievable; I’ve never been involved in another park like it.”

Its opening has also drawn more members of the local community to the park.

“Typically, and you find this in most areas where there is a state park, people in the local community are not among your visitors,” Greenwood said. “They always want to go somewhere else to visit or to vacation, but this new Center has proved to be a drawing card for the locals.”

The Center has hosted numerous meetings of local organizations.

“That’s been a way to introduce many of our local citizens of what can be found here right in their own backyard,” Greenwood stressed. “They’ll come here for a meeting and wind up bringing their family back on a weekend to enjoy the beauty of this millpond.”

The 7,500-square-foot Visitor Center is the first LEED (Leadership in Energy and Environmental Design) rated facility at a North Carolina State Park. The Center boasts of exhibit space, an auditorium, classrooms, work space and administrative offices, plus a 600-square-foot outdoor classroom. A trail leads from to the outdoor classroom at the edge of the pond.

Merchants Millpond, which attracts 240,000 visitors per year, is unique in its primitive camping offerings.

“If you like to rough it, this is the place to be; those campsites are really popular in the fall and the spring,” Greenwood said. “There are folks who like to live off the land. They are not that many places in our state where you can paddle out and camp on high ground overlooking a swamp all night long.”

Greenwood said roughly one half of the annual visitors to the park are from North Carolina. That is nearly equaled in number to those visiting from the Hampton Roads area in Virginia.

“But we do see people from all over the world….we’ve had visitors from the Netherlands, Germany, India,” he said. “They’ll look at a map and chart the unique places they want to visit in the United States and we’re one of them.”

The cornerstone of any state park is to protect the natural resources and environment of that particular area.

“We do natural resource management on a daily basis,” Greenwood explained. “We do control burns; spray the millpond to kill off evasive aquatic plants; aerate the pond to ensure that the fish will survive through harsh conditions…things of that nature are done to preserve this park for generations to come.”

The next step in the process is to open up more of the park so that visitors can have the opportunity to experience even more of this beautiful natural setting.

“We’ve added platform camping down on Bennett’s Creek and added a bike trail over on the north side so people can ride all the way to the pond,” Greenwood said. “Some of them are 25-foot by 25-foot platforms capable of allowing a large group to camp. They can paddle from here all the way out to the Chowan River, out to Holiday Island and back. Visitors here are not just bound by what’s inside this park.”

While he isn’t the “go to” guy any longer at Merchants Millpond, Greenwood closed by promising to remain a part of the local community.

“I’ll still be involved here locally, including coaching soccer at the Community Center. Relationships are important to me; so is my family,” he concluded.

JACKSON – Growing pains….that’s what Clements Mechanical is feeling. And thanks to the Northampton County Board of Commissioners, the “pains”... read more