RICH SQUARE – Less than one week after being released from jail, Dontay Pugh is back behind bars.

Pugh, 20 of Rich Square, was arrested July 30 for breaking and entering, the same crime for which he served a three-month jail term and was released July 25. 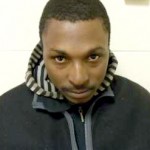 This time around, Pugh allegedly broke into two homes on Main Street in Rich Square.

According to Rich Square Police Chief A.B. Roye, on July 29 he met with the owner of a residence at 428 South Main Street where a break-in was reported. Entrance to the house, which is currently vacant and is used as rental property, was through a front door window that Roye discovered as broken.

“There were numerous items in the living room area that did not belong there, such as bed linen and food. There was nothing in the house for the suspect to use because the house was vacant,” Roye stated.

Roye then checked the house next door at 424 South Main Street and found a broken rear door window and the door ajar.

“This house is also a rental, but occupied as a seasonal home. The renter was not here at the time,” Roye said.

Upon entering the residence, Roye noticed that the pantry door in the kitchen was open and items appeared to be missing. There was also some pillows and blankets missing from beds.

The items found at 428 South Main Street were seized for evidence and submitted to Detective Lieutenant Jeremy Roberts of Ahoskie Police Department for fingerprint examination. Roye said Roberts did find fingerprints that matched those of Pugh.

Warrants were issued for Pugh and he was arrested by Officers D.G. Twine and T.R. Staton. Pugh was booked in the Northampton County Jail under a $60,000 bond.

“I greatly thank Detective Lieutenant Jeremy Roberts of Ahoskie Police Department for his excellent forensic work. He is truly an asset to the community,” Roye said.

GATESVILLE – Last year Gates County High was 7-4 and lost in the first round of the 1A state playoffs.... read more