WINDSOR – Since his unanimous appointment by the Bertie County Commissioners in June, Scott Sauer has truly embraced the green lands nestled between the Chowan and Roanoke rivers.

“The community has been so gracious in welcoming me,” he said during an interview in his office at the County office building. “It’s been a smooth transition.” 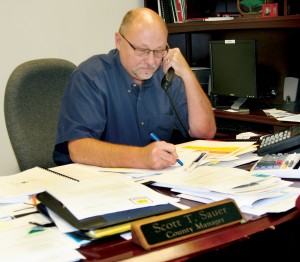 New Bertie County Manager Scott Sauer is shown working this past week in his Windsor office. Sauer comes to Bertie after serving as county manager in Harnett County for four years. Staff Photo by Gene Motley

Sauer comes to Bertie after having served for the past four years as Harnett County Manager. He served in that capacity from February of 2009 through December of last year.

He has also previously served as County Manager in Sampson County, Scotland County and Caswell County.

“I feel well equipped to serve this community,” he acknowledged. “I’m well-tested after 20-plus years.”

Bertie Commission chairman Wallace Perry voiced as much when he said, “We were able to get a man with a lot of experience; we feel very fortunate to get him.”

Sauer stated as much equally of his new employers. “The county commissioners have a very aggressive and ambitious set of projects they would like to undertake and I’m enthusiastic about bringing these to fruition,” he noted.

“This is an excellent opportunity to work with a board that has a vision of change and improved services to citizens,” Sauer said. “I look forward to working with a board that is not afraid to make difficult decisions.”

“We’re in the midst of a very dynamic economy right now,” he added. “The commissioners have a vision and things should be exciting in the next 18 months or so.”

Two projects have already begun under his watch: the commissioners last month approving the privatization of the county’s emergency medical service, and bids will soon be received on a plan for county-wide household garbage pick-up.

Currently, Sauer is getting settled in and getting a handle on his new duties.

Sauer will really have to budget his time. On the day of this interview he had several municipal as well as county officials waiting to meet with him in his office.

“What are the biggest challenges,” he asks as he repeats a question. “Time and money and how they can be used in addressing the issues.

“While some resources are limited here in BertieCounty, this board of commissioners are careful with their spending, but creative with their thinking and strategic development,” he added

“Let’s hope the economy is on the upswing and Bertie County will benefit,” he pointed out.

Farming, Sauer maintains, is the county’s biggest industry, and he feels his prior work in previous counties with an agriculture-based economy will serve him well here in Bertie.

Sauer also pays homage to the education system. He had earlier in the morning come from a program on the continued construction at the new Bertie High School.

“It seems to be progressing well,” he acknowledged. “It represents a tremendous investment and it is one that is strongly supported by the commissioners.”

Another part of Sauer’s vision for the county comes from the melding of one of his recreational loves and how BertieCounty satisfies it.

“I enjoy the water,” he says.”I’ve spent quite a lot of time kayaking on the CashieRiver. I’d like to see a movement to bring in tourism to the county for ‘passive’ recreation.

If there is success under Sauer’s leadership he takes a practical viewpoint regarding it.

“The success goes to the elected officials,” he asserted. “They bring the recommendations and it’s my job to execute the plan once they take action.”