From bad to worst 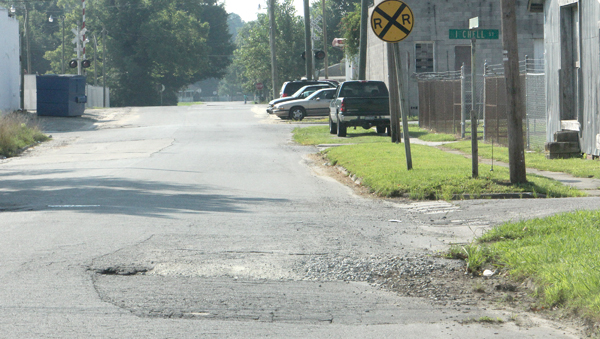 Shown here is one bad section of Hayes Street, near its intersection with Mitchell Street, in Ahoskie. A recent survey reveals that Hayes Street tops a list of the 10 worst roads in the town. Staff Photo by Cal Bryant

AHOSKIE – If town officials here decided to tackle the issue of street repairs all at one time, that effort would come with a $1.84 million price tag.

However, that’s a sum of money the town doesn’t have on hand, but yet its system of streets are showing signs of deterioration.

“This is an issue that Mr. (Winfred) Hardy (Town Councilman) addressed at our last meeting,” said Ahoskie Town Manager Tony Hammond. “It’s also an issue that the Public Works Department addressed during the Council’s annual retreat.

At the June meeting, Hardy requested a priority listing of the town’s streets in need of repair.

According to a survey of the town’s 10 worst streets, Hammond noted that nine of them were dead end streets.

Topping the list is Hayes Street (not a dead end), especially the portion between Railroad and Catherine streets. The estimated cost to repair that one section is $24,672.

The other nine are, in order:

“Kirk (Rogers, the town’s Public Works Director) and I will evaluate the streets based on this survey and use it to determine which streets should receive priority with the Powell Bill funds for the current fiscal year,” Hammond stated. “Kirk and I are also taking a look at some other streets that have more traffic. They’re not in the shape of our worst streets, but in need of repair.”

Powell Bill funds come from the state and are earmarked for street additions or repairs. In 2012, Ahoskie received $96,553.39 in Powell Bill funding plus another $57,499 from the Highway Trust Fund.

“Combining those two sources of revenue, you see we receive about $150,000 a year for street repairs,” Hammond noted. “Last year, just the repairs we made to Church Street alone (a paving project from Catherine Creek Road to Academy Street) took $80,000. The money from the state doesn’t go very far.”

Hardy said a starting point could be just to fill in some potholes.

“I know we don’t have the money to pave all these streets, but if a street has a pothole, why can’t we just dig it out and fill it in with asphalt,” Hardy inquired.

But the broader picture is overall repairs. Hammond said there was an option for the town to tackle that issue. He said there was a company based in Texas that could help Ahoskie’s situation.

“They do large scale paving projects for small, rural communities and they offer financing,” Hammond said. “They did this for Ahoskie about 15 years ago. It was a one million dollar project that was financed over a period of 10 years. They could be an option for us again. I’m going to forward a copy of our street survey to them and let them give us an idea of what they can offer.”

Hammond promised to update the council on a possible proposal from the Texas based company at their next meeting on Aug. 13.

When the clock struck high-noon Friday and the two-week filing period for candidates seeking election to municipal offices in the... read more