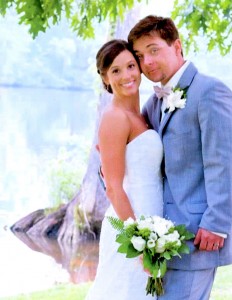 The groom is the son of Johnny Sumner and Gay Sumner of Como. He is the grandson of Myrle Curle of Como and the late Elvin Britt Curle, and the late Lokie and Riopel Sumner.

The wedding ceremony and reception took place at the home of Kenny and Gina Parker, uncle and aunt of the groom, at Leisure Shores.

Pam Carr of Como, aunt of the groom, and Hope Hill of Murfreesboro, friend of the bride, served as mistresses of ceremony.

The bride and groom planted a unity tree to symbolize the joining of their two families as one and in memory of their loved ones who have passed on.

Music for the ceremony and reception was provided by David Floyd of Franklin, VA.

Decorations, flowers, photos, wedding cake, makeup and hair styling for the wedding ceremony were provided by family and close friends.

An after rehearsal dinner and dance was given by Gay Sumner, mother of the groom, and Chris Francis at their home at Leisure Shores on Friday, May 17.

The bride is a Physical Therapy Assistant at Southampton Memorial Hospital in Franklin, VA. The groom is a Vice President with Southern Bank and Trust Company in Ahoskie.

The couple honeymooned in Aruba and now make their home on Buckhorn Church Road in Como.

A co-ed shower and dance was given by friends of the couple on March 16 at the home of Tommy Helms and Elizabeth Powell in Como.

A Bachelorette party was given for the bride by her sister, Kristen Ward, at her home in Charlotte on April 27.

A Bachelor party was given by friends of the groom on May 4 in Myrtle Beach, SC.