JACKSON – Laura Nancy Jane Boone of Raleigh and Christopher Carson Willis of Sanford were married during a 4:30 p.m. ceremony on Saturday, June 1 at The Church of the Saviour in Jackson. 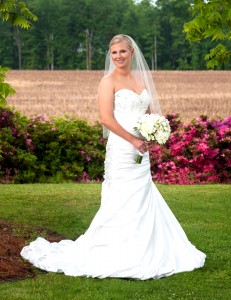 Given in marriage by her father, the bride wore a fitted white satin gown featuring ruching across the front, gathering to one side, and was adorned with beadwork across the top of a sweetheart neckline. Her handmade veil fell across the back, accentuating the corset back closure adorned with the same beadwork down each side. The bride carried a pastel arrangement of white, yellow and blush roses.

Ella Rodriguez of Atlanta, GA, the daughter of Robert Rodriguez and Shelli Willis, served as the flower girl.

Sallie Lewis Futrell and Dana Edwards Boone were the Mistresses of Ceremonies.

Music was presented by Olivia White Biggerstaff. The reader was Eric Douglas Warsaw.

Mary Ann Edwards of Jackson served as the Crucifer. The Junior Crucifer was Sarah Kathryn Ricks, the daughter of Jason and Karren Ricks of Jackson.

Tara Melissa Lyons of Raleigh served as the register/program attendant.

A reception followed the ceremony at The Roanoke River Mill in Weldon.

Following a wedding trip to Ireland, the couple will reside in Sanford.

Laura works as a nurse in the Cardiac Critical Care Unit at RexHospital in Raleigh. Carson is employed as a financial advisor for BB&T Wealth in Sanford.

A miscellaneous bridal shower was given at The Church of the Saviour Parish House by Hillary Harrell, Meghan Brown and Tammy Bridgers.

On May 11, a brunch/bridal shower was given by friends of the Willis family at the Dunes Club in Atlantic Beach. Later that evening they were entertained at the home of Dr. and Mrs. Matt Zettl of Morehead City with a backyard barbecue.

On May 31, a rehearsal dinner was hosted by the groom’s parents, Craig and Nancy Willis, at David’s Restaurant in Roanoke Rapids.

A wedding day brunch was hosted by friends and family at the Magnolia House in Jackson.

Jessica B. Brown of Ahoskie and Thomas H. Spruill II of Colerain will marry during a 2 p.m. open church... read more