LEWISTON-WOODVILLE – Briley Marie Johnson of Lewiston-Woodville and Braxton Bragg Dawson Rascoe, Jr. of Windsor were married Saturday, June 15 at the home of the bride. 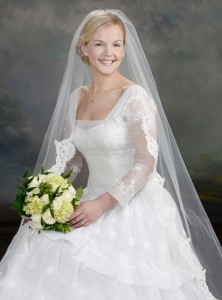 The bride was given in marriage by her fathers, John McCollum Griffin and James Stanley Johnson. The bride wore the wedding gown of the groom’s paternal grandmother, which the groom’s mother also wore on her wedding day.  It was embroidered silk organza with a portrait neckline.  The skirt formed a court train.  She wore the veil of her sister and jewelry of her maternal great grandmother.

Mrs. Lindsay Griffin Vaughan, sister of the bride, of Woodland, and Mrs. Claire Spruill Tyler of Edenton were the Matrons of Honor.

Maid of Honor was Miss Emily Susanne Newnam of Beaufort.

The bridesmaids’ dresses were coral in color and made of summer linen.  They were designed by Emily Newnam, owner of Southern Frock and the Maid of Honor.

Ann West Griffin of Columbia, SC, Finley Cabel Griffin of Richmond, VA, and Margaret Kruesi Griffin of Greenville, all cousins of the bride, were the flower girls.

Griffin Southgate Vaughan, nephew of the bride, of Woodland served as the ring bearer.

The Mistresses of Ceremonies were Mrs. Laura Matheson Beasley of Colerain, and Mrs. Ella Plyler Frantz of Raleigh.

Music was presented by Nowell Strings of Wilson. The choir was directed by Lloyd Ambrose Owens.

A reception in the yard of the home of the Bride followed the ceremony.

On Friday evening, a dinner dance hosted by the groom’s parents along with family and friends was held at their home, Briar Patch Hall.

Following a wedding trip to Vieques, Puerto Rico, the couple will reside in Wilson.

The groom graduated from Virginia Episcopal School and the University of North Carolina at Wilmington, Cameron School of Business. He is a member of the Kappa Alpha Order. He is employed by Alliance One International, Inc.