MURFREESBORO – A chase that reached speeds at times in excess of 100 miles per hour ended here safely due to the quick action by local police.

On Thursday, the Murfreesboro Police Department took Jacobia Reid III, 20, of Pine Street, into custody after he led law enforcement officers on a high speed chase on the US 158 Bypass.

Reid stands charged with two counts of attempted murder, two counts of assault with a deadly weapon with the intent to kill a law enforcement officer, and one count of felony speeding to elude arrest. 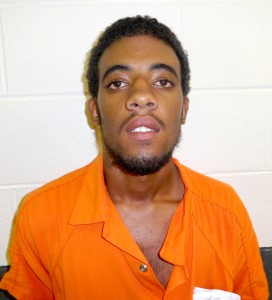 According to Police Chief Darrell Rowe, the suspect’s vehicle was first spotted traveling in excess of 100 miles per hour by Captain Chris Sumner on the US 158 Bypass. The vehicle was traveling east toward Mapleton.

“Captain Sumner radioed in that he was going to try to catch up to the vehicle,” said Rowe.

Once Sumner caught up with the vehicle, the driver failed to yield or pullover. The officer alerted that he was now in pursuit of the vehicle, which continued toward the Mapleton community.

“Once there the vehicle turned around and travelled back west,” said Rowe.

Other officers from the police department and Chowan University Police then joined in the pursuit. Rowe said during the chase the suspect reached speeds in excess of 100 miles per hour.

“Several times the suspect’s vehicle attempted to turn right off of the Bypass on to streets that would have led him into town, but officers were able to block those attempts,” Rowe said.

“The suspect then intentionally rammed Captain Sumner’s vehicle on the left side,” Rowe said.

“Captain Sumner requested (on the radio) that I allow him to perform a PIT (Pursuit Intervention Technique) maneuver on the suspect,” Rowe said. “Being that the suspect showed complete disregard by assaulting two officers with his vehicle and it appeared he was trying to get into town where the traffic is more congested, I gave him permission to conduct the PIT maneuver.”

Sumner performed the tactic on the suspect’s vehicle, which spun out and came to a stop on the median just before the Hertford/Northampton county line. Reid was then taken into custody.

Rowe said there are more charges (traffic related) against Reid that have yet to be filed.

Rowe praised the work of his officers as well as those who came to assist in the chase.

“I want to commend the officers for the professionalism shown during the pursuit and showing bravery in blocking the suspect from entering into town,” he said.

Rowe added had the suspect travelled into town it could have led to a more dangerous situation for area citizens.

“I appreciate all of the assisting agencies responding,” Rowe said. “Law enforcement works that way. You never know what is going to happen—from the most mundane to situations where you will have to use your most professional tactics, which is why officers are highly trained.”