WINDSOR – A somber mood was cast here Saturday over what is typically a joyous event.

Seventeen-year-old Deonta Whitaker of Lewiston was killed in a motor vehicle accident while en route to his graduation from Bertie High School. The single vehicle crash that occurred on Republican Road (RP 1225) near its intersection with Cow Track Road also claimed the life of his brother, Anthony Whitaker, 24, of Kelford. 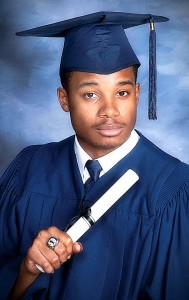 “As a member of the military and being up close to the battles, death is always near and always tragic, but that was nothing compared to what our school had to go through Saturday morning,” said Bertie High School Principal Calvin Moore. “That was a tough day, a heartbreaking situation.”

What made it tougher for Moore was he was charged with informing the parents of the deadly accident, to include one of his longtime peers in the business of education, former Bertie High School football coach Barry McGlone who is the stepfather of the two brothers. The parents had arrived at the graduation and were waiting on the two brothers.

“Sharing that type of news with parents, with loved ones is never easy,” Moore stated. “We also had to inform those gathered at the graduation of what had occurred. We really appreciate everyone being so understanding, especially when we broke from the normal protocol typically followed at a graduation exercise. While it was a time to celebrate, it was also a time to mourn.”

Moore said he had coached Anthony Whitaker in football and also taught him in class.

“I can tell you for fact that both these young men were well liked by all; both were respectful young men,” Moore noted.

“I gathered with the graduating class before they marched in and we prayed together,” Moore added. “The Lord allowed us to get through that day and I know he’ll be there for the family and friends in the coming days and weeks.” 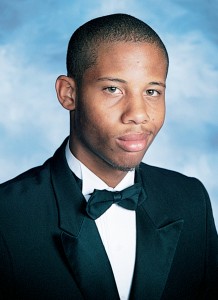 Moore said even though the last day of school was June 7, some students were coming to the campus on Monday for various reasons. There, a crisis team was set up in the gym for students or staff to visit if they felt the need.

“Like we say in the Army, you carry on with the mission at hand, but death in any form is never easy,” Moore concluded.

According to Sgt. Mike Warren with the North Carolina State Highway Patrol office in Ahoskie, the accident was reported to have occurred sometimes around 11:30 a.m. Saturday, just an hour prior to graduation exercises at Bertie High. The accident scene was less than four miles from the high school.

Warren said Anthony Whitaker was driving a 2004 Honda passenger car with his brother as a front seat passenger.

As the vehicle, traveling south, was entering a curve, Warren said driving at an excessive speed allegedly caused Anthony Whitaker to lose control of the vehicle. The car then came back into the southbound lane when it ran off the right side of the road.

“It was at that time where the driver overcorrected, causing the vehicle to come back onto the road where it traveled left of center, eventually off the left side of the road where it impacted a ditch,” Warren said. “After impacting the ditch, the vehicle continued sideways down the roadside where it struck two trees on the driver’s side. The vehicle eventually came to rest in the woods line behind the two trees it struck.”

Warren stated that both brothers were wearing their seat belts. However, the force of the impact caused Deonta Whitaker to be ejected from the vehicle.

Both men were pronounced dead at the scene and were transported to Vidant Medical Center in Greenville for an autopsy.

Warren said the roadway was dry at the time of the accident, ruling out a weather-related crash on the heels of Friday’s passage of Tropical Storm Andrea through the local area. That storm forced the postponement of Friday’s scheduled graduation exercises at Bertie High School.

The accident brought the death total on R-C area roadways to four this year. Three of those fatalities have occurred in Bertie County.

WINDSOR – Those in need of emergency medical services perhaps would not notice the name on an EMS vehicle responding... read more