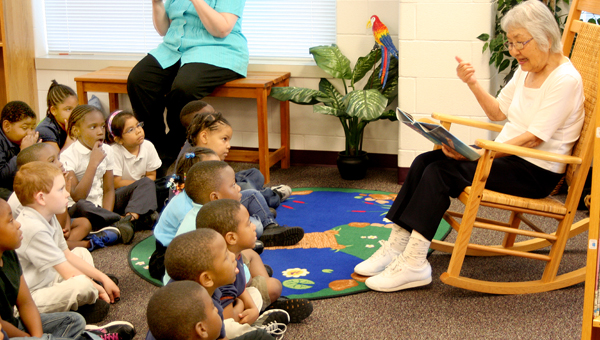 Sachiko Cannon reads Japanese folklore to a group of Kindergarten students at Central Elementary School in Jackson. She is the grandmother of Hollie Cannon, a teacher at the school. Staff Photo by Amanda VanDerBroek

“Mainly it’s about exposing them to the culture, and not just about what’s right here,” Cannon said. “I want them to be globally competitive, so I want them to be aware of the other cultures out there.”

All week, Cannon worked with the students in her class on activities related to Asian culture. The children learned how to use chopsticks, about Asian food and read a story called “Obon” about the Japanese custom of the same name in which the spirits of one’s ancestors are honored.

“We kind of tied that into how Americans celebrate Memorial Day, or Decoration Day as it was called,” she said. “With Memorial Day coming up I felt like this was the perfect way to tie in the two, and really expose the children to not how we celebrate holidays or the ones that we have lost, whether they died in war or not, but a way another culture may celebrate it as well.”

After reading “Momotaro”, a Japanese folklore about a Peach Boy, to the students, Sachiko Cannon and her husband, Maurice, spoke to the Roanoke-Chowan News-Herald about her experiences in Japan during World War II.

Sachiko was born in 1931 in Tokyo, Japan. Her family survived repeated bombings in the city during World War II.

“Her family was the luckiest family in World War II,” said Maurice. “Their home was bombed three times during the war, but no one was hurt or killed.”

“The first two or three years (we heard propaganda), but nothing happened, no attacks or bombings,” she said. “Nothing happened on the Island of Japan.”

Japan did not see bombings by American Forces until the later part of the war. Sachiko was able to attend school normally until 1944 when the first air attacks began in the country.

During her second year of high school she was sent to work in factories.

“All the students were sent to factories,” she said. “I had to go to an airplane factory.”

When the air attacks started to increase in Toyko, Sachiko recalled hearing sirens each night, warning of impending bombings.

“We had to go to, we called them bokugo, underground bomb shelters,” she said. “We went in there almost every night.”

She also remembered one frightening night when her family nearly missed a bombing that destroyed an air raid shelter they intended to take cover in.

“They told us to get out and go to a shelter so when we (left) I looked at the sky, you could see the red fire near by…there were people running everywhere,” she said.

Sachiko remembered large crowds frantically trying to find a shelter. She said her mother went to a guard to ask where her family should go to escape, but to no avail.

Sachiko said after the air raid stopped, she, her mother, and brother came out of the shelter. After finding her father and younger sister, who had stayed in another shelter, the family began their journey back home.

On their way, they saw the first shelter they tried to take cover in had been bombed out and those who had sought safety there had perished.

“It was all burned down,” she said.

Sachiko and family eventually moved to the countryside with her mother’s sister outside of Tokyo to avoid the air raids in the city.

Following the war, she worked in a US Army commissary where she learned English and was trained in typing and other various clerical skills.

The US Navy eventually took over the commissary, and in 1959 she met Maurice, her husband of 53 years.

“I looked at her and said you’re going to go with me,” he recalled about their initial meeting.

In 1960 the couple wed and moved to the United States.

As far as her time with the students, Sachiko said she liked visiting her granddaughter’s classroom to speak about Japanese culture.

Aside from the disappearance of young Phyllis Powell from her front yard in Woodland in 1963, the case of Daniel... read more