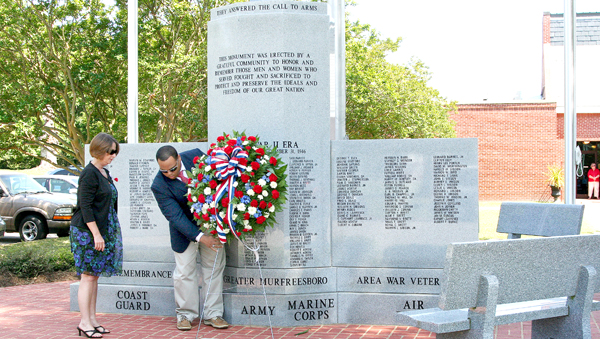 On Monday, veterans, families and citizens gathered to rededicate the Murfreesboro War Veterans’ Memorial located on Broad Street, as well as remember those who gave the greatest sacrifice.

Constructed in 2007, the Memorial has recently seen the addition of two more flag poles—for the POW/MIA flag and the state flag—and additional brick work.

“This is a great day for Murfreesboro,” World War II veteran Joe Dickerson said. “As you know, with the exception of Chowan University, there has never been a state flag flown in Murfreesboro that I can remember.”

Last year a committee of three, including Dickerson, David Farnham and Brinson Paul, went to the Murfreesboro Town Council to seek out assistance in completing the Memorial.

Dickerson said after a few meetings with the Council, the town decided to help and the committee began its fundraising for the project.

“As of today we are proud to announce that with the additional flag poles the state flag and the POW flag are flying in Murfreesboro,” Dickerson said. “These will be dedicated today and continue flying for everybody to see.”

Dickerson thanked the town, fellow committee members as well as others who made the project possible.

The ceremonial flag that flew over the US Capitol in 2007 was retired during the dedication. The flag was presented to Mayor Pro-Tempore Sarah Wallace on behalf of the town for safe keeping until the next ceremony.

Another American flag was raised by officers with the Murfreesboro Police Department and the POW/MIA flag and the state flag were raised by local war veterans.

“On behalf of the town, I’d like to thank everyone responsible for the improvements made to our Veterans’ Memorial, including the addition of the new state flag and the POW flag,” she said. “The town has always been receptive to our veterans and welcomed them home.”

She noted her father’s name appears on the memorial along with so many others.

“I would like to thank Mr. Dickerson, and all those involved in keeping their memories alive on this beautiful Memorial they have provided for us,” she said.

Farnham thanked those in attendance for their support and contributions.

“We are fortunate that the Town of Murfreesboro approved the initial creation and modification of the monument and pleased by its Public Works Department for coordinating the construction of both phases to what you see before you today,” he said. “We are most grateful for all the individuals who willingly gave their time and energy to make this monument a living memorial for Murfreesboro.”

Youse, who now lives in Henrico in Northampton County, enlisted in the Army in 1960 and was assigned to the Field Artillery. He served one year in Korea and in 1965 he was selected to attend the Non-Commissioned Officer Academy in Hawaii. Sgt. Youse graduated first in his class and was awarded the Commandants Leadership Award.

The following year, he was nominated for and attended Field Artillery Officer Candidate School in Oklahoma. Again, Youse was first in his class and was commissioned a Second Lieutenant.

Major Youse had a distinguished career in numerous staff positions at Battalion, Brigade and Corps levels, held three separate commands and spent two years in Vietnam as Senior Advisor to an infantry battalion.

He retired from the Army in 1981 at the rank of major.

Youse reminded the audience what those who paid the ultimate price have given up for the freedoms all Americans enjoy today.

“America is rich with the spirit of sacrifice,” he said. “It’s a nation whose citizens have bled on battlefields the world over for the benefit of all mankind.”

Youse said Memorial Day is just one day in a year of days when Americans revisit history and trace the journey that great Americans have traveled to assure the nation’s standing remains powerful and prosperous.

“Today we try to imagine how so many brave men and women found the uncommon courage to die for our advantage and generations of people they’ve never known,” he said.

Youse said in the 238 years since the first colonial soldiers took up arms more than 1.4 million Americans have died fighting for the freedoms United States citizens enjoy.

He recounted the history of Memorial Day and its roots in the Civil War during which southern women would flowers at the graves of soldiers (both Confederate and Union). The day was first known as Decoration Day before it became Memorial Day in 1882.

“There’s no turning back now, the chance is forever gone for us to look into the bright eyes of the many brave men and women who we honor today,” Youse said. “But if there is some one, any one in your life today who has donned a military uniform or if you pass a member of the military in the street look him or her in the eye—just say thank you.”

He continued by saying, “As we rededicate this beautiful Memorial, let us also rededicate ourselves to the memories of those who paid the ultimate price. We must never forget.”

Following Youse’s comments, Wallace along with Murfreesboro Town Administrator Brandon Holland laid a wreath at the front of the War Veterans’ Memorial.

The price of freedom

AHOSKIE – Why must we, as Americans, limit ourselves to only one portion of a single day to pay tribute... read more