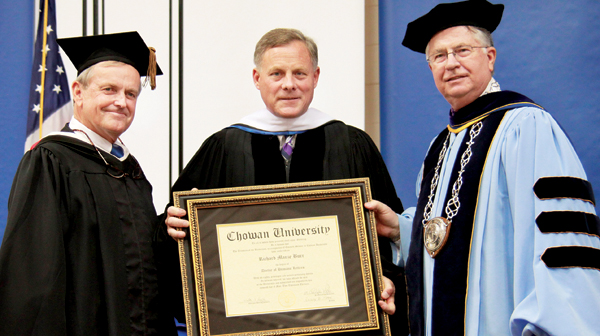 MURFREESBORO – Chowan University celebrated its 165th Commencement ceremony with a special guest, United States Senator for the State of North Carolina Richard Burr, on May 11 in the Helms Center.

“Graduation day is more than the end of four years of college. It is recognition of how seriously you take education and your commitment to bettering your lives, but also the beginning of a new chapter,” stated Burr in his address to the graduating class. “Armed with your degrees, you will take the next step towards contributing to your communities and, ultimately, this country.”

Much of his address focused on overcoming obstacles to better oneself and one’s surroundings, with America’s first Secretary of the Treasury Alexander Hamilton as his leading example.

“Great Americans, like Hamilton, are not complacent or content with settling for the hands they have been dealt,” Burr noted. “They are constantly seeking new challenges, working to better themselves and those around them, and always contributing to a higher good. Graduating today tells me that you know how to persevere and achieve something important that sets the stage for the next chapters in your lives. Never forget that tomorrow, your future, is always determined by you and the actions, work, and dedication you put into bettering yourselves and your communities.”

In addition to speaking the keynote address and receiving the “keys to the city” from Murfreesboro Mayor John Hinton, Burr was awarded the honorary Doctor of Humane Letters for his exemplary service to the State of North Carolina from Chairman of the Trustees Frank Rose and Chowan President Dr. Chris White.

First elected to the U.S. House of Representatives in 1994, Burr served five terms in the House and is currently serving North Carolina in his second term in the U.S. Senate. He is a vocal advocate for men and women in the military and their families, and for the growing population of veterans across North Carolina.

In the Senate, Burr serves as Ranking Member of the Senate Veterans’ Affairs Committee where he works to improve the quality of health care and services our nation’s veterans receive. He also sits on the Health, Education, Labor, and Pensions Committee; the Intelligence Committee; and the Finance Committee.

The son of a minister, Burr and his family moved to Winston-Salem, NC when he was a young child. After graduating from WakeForestUniversity, he began his career far from the halls of Congress by spending seventeen years in business with Carswell Distributing, a wholesale commercial products company.

He also serves as a Board Member of Brenner Children’s Hospital and on the West Point Board of Visitors. Richard and his wife, Brooke, have two sons.