Tunis: help is on the way 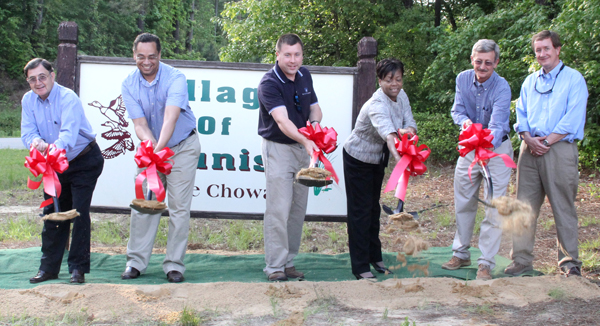 WINTON – They came by car, truck, SUV and golf carts.

The intersection of River Road and Tunis Road was crammed with vehicles on Thursday afternoon where local residents joined with Hertford County officials, project engineers and contractors to formally break ground on the Tunis Wastewater Collection System.

For many in Tunis, a small community on the shores of the Chowan River that sees a population boom when the weather turns warmer, the wait has lasted 10 years for an answer to their wastewater woes. Tunis residents have experienced problems with private septic systems; some did not have one at all, rather “straight piping” raw sewage into inappropriate containers and hauling it offsite. Those environmental concerns were discovered in the spring of 2008, prompting the State of North Carolina to issue notices of violation against some Tunis residents using the “straight piping” method.

Additionally, environmental health personnel also learned in 2008 there were existing septic systems too close to the water, meaning they did not meet setback requirements for such systems.

Now with a wastewater collection and disposal system, those same residents will hopefully see those problems disappear with a simple flush.

“I know I’m no more glad than you (Tunis residents) to be gathered around this (Tunis) sign for this groundbreaking,” said Hertford County Manager Loria Williams. “It’s been a long, hard fought project and I want to thank all of you for your patience. We’re finally nearing the point where a safe, sound, sanitary system will be in place for the residents of Tunis.”

Williams noted that the actual installation of the sewer system will cause some interruption of the normal, everyday life of this community.

“But in the end it will all be worthwhile,” she stated.

She thanked several individuals for their help in getting this project off the ground, to include Slade Harvin and Gary Hartong of the Wooten Company, the county’s engineering firm.

“They’ve been with us on this project from the very beginning,” Williams said. “They helped guide us through the process to obtain grant money – USDA ($1.329 million), NC Rural Center ($500,000) and general obligation bonds ($307,000). We wouldn’t be where we are on this project without their guidance, helping me to navigate through the system of revenue sources.”

Williams said the Tunis residents were also key to the success of the project.

“Your participation to sign-up for the sewer system helps satisfy the USDA requirements,” she stressed.

Also in attendance at the ground-breaking ceremony were the owner, Rick Williford, and project superintendent, Jimmy Daniels, of Sunland Builders, the firm that will construct the maze of pipes and pumps. Hertford County Public Works Director Mike Bradley and Hertford County Commissioners Bill Mitchell and Johnnie Ray Farmer were also present.

“Thank you all for the three p’s – patience, participation and presence,” said Mitchell. “All of those things have been of the utmost importance with this project.

“I’ve been hearing about this project for the five years that I’ve been on the board, so this is an exciting day for me,” Mitchell added. “I can tell you all are equally as excited. I need to thank our county manager for all the work she has done behind the scenes on this project. She has worked numerous hours and we appreciate that.”

“This project has been a long time in coming,” said Farmer. “Thank you for hanging in there with us. We’re going to start digging holes very shortly.”

Following the groundbreaking, Tunis residents and project officials gathered for an informational meeting about the construction process.

WINTON – Information please! That was the mission of a Thursday evening session held at Closer Walk Ministries in Tunis... read more