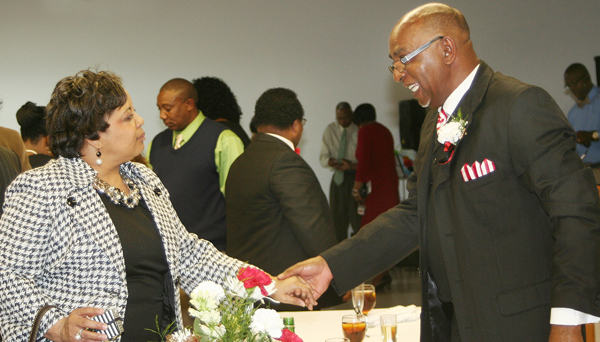 Now retired Bertie County Manager Morris Rascoe is shown here being greeted by one of many in attendance at his grand send-off on Saturday at the Cashie Convention Center. Staff Photo by Amanda VanDerBroek

WINDSOR – A career of service may have ended, but not without a grand send-off.

On Saturday, family, friends and colleagues recognized and celebrated Morris Rascoe and his dedication to Bertie County and North Carolina during a retirement party at the Cashie Convention Center.

After more than 35 years of combined service to the Bertie County Department of Social Services (DSS) and County Government, Rascoe announced his retirement in February with March 31 being his last day.

Rascoe said he’s always worked with the notion that you never let anyone see weakness. He added he’s promised the county commissioners that if they needed him to assist in any way he would be there.

“I would never walk off on my county,” he said. “When I gave notice I made sure things were in order, certain tasks were done and told them they could call me at any time.”

He lauded his staff at DSS and those in county administration.

The Bertie native began his lengthy tenure with the county in 1977 as a DSS social worker. In 1985, he became DSS Assistant/Interim Director and two years later he became Director of the department.

In 2002 while he was still the Director of Bertie County DSS, Rascoe took on the duties of Assistant County Manager as well. In 2011, Rascoe became the Interim County Manager, a position he held until his retirement began.

Of the many highlights of the evening, Rascoe was presented the Order of the Long Leaf Pine by State Representative Annie Mobley, on behalf of Gov. Pat McCrory.

“No one asked me for it, but when I looked at the number of years and the person that it was I knew he is deserving, he is truly deserving,” Mobley said. “And I know—based on what little time I’ve spent in the house during retirement—that he’s not in the house to stay. So you all keep him busy, keep him young and keep him looking good.”

In addition to his career commitments, Rascoe has been heavily involved with various community boards, organizations and his church, Cedar Landing Missionary Baptist Church.

Of the many people who “Toasted and Roasted” Rascoe were Alice Ballance, a former DSS Board Member, Lewis Hoggard of the CPTA Board, Assistant County Manager Misty Gibbs and his brothers, Quinton and Essie Rascoe.

Ballance said she had known Rascoe since the time he was an infant and was good friends with his late mother.

“Morris Rascoe was the sweetest little thing you’d ever seen in your life,” she said. “And I don’t know where he got it from; he might have gotten some of it from me ‘cause I visited a lot when he was a little boy.”

Ballance noted Rascoe’s desires to help people from an early age and his successes, including those from his education and how he chose to use that knowledge.

“Morris Lee did things that I couldn’t even think about doing,” she said. “He could have taken any job that he wanted to take, but he chose to take a job that he could help somebody to be like he was and to be like the people he grew up with.”

Hoggard read a letter from CPTA Director Pamela Perry, who could not attend the event. In addition, Hoggard, who has known Rascoe for a time, shared his own memories with the audience.

Hoggard said Rascoe has been behind the opening of shelters when there were storms or tornadoes in Bertie County.

“It’s sad that we have to do those things, but when ever there is a natural disaster in Bertie County, and there seems to have been quite a bit, Mr. Rascoe was up all night, two or three days up without sleep,” he said. “And you should be commended for that.”

Gibbs said she was blessed to work with and for Rascoe.

Essie and Quinton Rascoe congratulated their brother on all the accomplishments in his career.

“He’s a very focused person,” said Essie Rascoe. “He’s always in deep thought, extremely dedicated to his staff and friends. He’s, of course, smart, outgoing and fun to be around, and he’s a very caring person and he looks out for his family.”

WINTON – The good news is that thanks to slight growth in property values, Hertford County local government will have... read more