During Monday’s Northampton County Board of Commissioners, Vincent announced he would retire effective August 1. 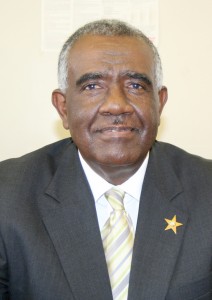 “I’ve come to inform the board that I will not be seeking re-election in 2014, and thereby will be tendering my retirement,” Vincent said. “I will be retiring August 1 with my last day of work July 31.”

He continued by saying, “It’s been a pleasure to serve the citizens of Northampton County. I’ve enjoyed working with the board, they’ve been very supportive and I’m very happy with what we were able to accomplish over the years.”

“Thank you for your service,” Vice Chair Virginia Spruill responded.

“We appreciate you coming and allowing us to be the first to hear it,” said Chair Robert Carter. “We wish you much success as you move into your years of retirement.”

During public comment Jack Saunders of Henrico expressed his congratulations to Vincent.

“We’ll miss Sheriff Vincent in his position and as one of his neighbors I will miss him,” he said.

Vincent began his lengthy career in 1978 when he was sworn in as a special deputy with the Northampton County Sheriff’s Office. He continued in that position until 1983 when he became a full time deputy.

“I was with the county until 1990 and then I went to Garysburg as the Chief of Police,” he said in an interview after the meeting.

Vincent would eventually return to the Sheriff’s Office. He was sworn in as Sheriff in 1998.

He said even though his career has been extensive it’s been enjoyable. Vincent said he’s been looking to retire for the past year.

“I had decided I would not be running for re-election in 2014 and then I decided it was time now for me to leave,” he said. “I wanted to work through the budget process with my staff and retire after that.”

Despite the rigorous work that law enforcement can bring, Vincent said he is going to miss the everyday unpredictability the position can bring.

“I definitely miss working with the citizens and my staff, coming to the office on a daily basis and dealing with the many challenges that come with the day,” he said. “I’ll have to adjust to that, but I’ve enjoyed it. I will be supportive to who ever takes over at that point.”

Vincent said plans are in the works to fill up that anticipated retirement.

“I think my wife has plans for me, spend some time with the family and grandchildren, and we have some traveling we want to do,” he said. “It’s been something that I’ve looked forward to for sometime now. Going into retirement is what we all worked for and I’m grateful to get there.”