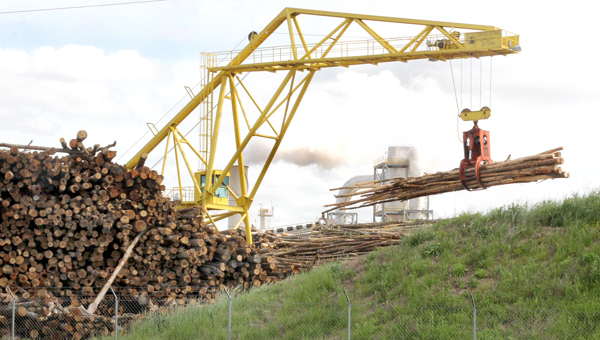 An overhead crane at Enviva of Ahoskie is shown moving logs as the plant in the background has been in full production to meet the growing demand for wood pellets. Staff Photo by Cal Bryant

Timber grown right here in the Roanoke-Chowan area and southeastern Virginia is being used to meet the rising need for energy domestically and abroad.

The demand for wood pellets in Europe has gone up dramatically the past few years as power companies across the continent have switched from using fossil fuels to produce electricity to renewable energy alternatives.

According to a report from the North American Wood Fiber Review, exportation of wood pellets from North America to Europe reached a new record of 3.2 million tons in 2012, with U.S. exporters more than doubling their shipments.

Locally, Enviva Pellets – with one mill open in Ahoskie;  another set to go online in Northampton County; and a third planned for Southampton County (VA) – is ramping up their operations to meet the increased demand for their product.

“Utilities around the world are increasingly turning to solid biomass fuels as a cost-effective means to deliver lasting reductions in the carbon intensity of energy generation,” said John Keppler, Chairman and CEO of Enviva. “As a key mid-stream supplier, Enviva and its growing capacity is positioned to sustainably source from one of the most robust natural resources in the United States the key renewable fuel for these growing international markets.”

Pellets shipped overseas from companies such as Enviva and others from North America increased over 60 percent from 2011 to 2012. The wood pellet export industry in North America has grown exponentially in a relatively short period of time. The export value has increased from an estimated 40 million dollars in 2004 to almost 400 million dollars in 2012. This fairly new trade development is the result of Europe’s quest to reduce its dependence on fossil fuels and to reduce CO2 emissions. Energy generation from renewable resources has, with varying pace, gone up in all countries in the European Union during the past decade.

Woody biomass, including wood pellets, is one energy source that has attracted both much attention and investments in a number of countries on the European continent. With limited domestic wood raw-material sources, countries such as the UK, Belgium and the Netherlands have increasingly relied on the importation of industrial wood pellets to reduce the usage of coal at some of their power utilities. The relatively high costs for wood pellets in Europe have resulted in increased interest in importing pellets from British Columbia and the southern states of the U.S. where wood raw-material costs are lower than in Europe.

From the US South, shipments were up over 100 percent compared to 2011, while Canadian exports increased 25 percent year-over-year.

The expansion of pellet production has been particularly noteworthy in the U.S. South where there have been 14 new pellet plants that are either new or planning to expand production in the coming year. Shipments from these plants were in excess of 100 percent more between 2011-2012.

An Enviva spokesperson told the Roanoke-Chowan News-Herald that their actual production data is proprietary. However they are pleased to say they have achieved or exceeded their targets. The company expects to achieve a run rate of approximately 1.7 million metric tons of pellets per year by the end of 2013.

Not only is the pellet export business lucrative for Enviva, it also pumps much-needed dollars into the local economy, both in employment as well as impacting the local logging industry.

Enviva employs 72 workers at Ahoskie and will be creating approximately 70 permanent positions at each of the Northampton and Southampton facilities.

The spokesperson added that in addition to Enviva’s direct employment, the company estimates that its facilities indirectly support approximately 70-100 positions in the supply chain. While those facilities are under construction, Enviva utilizes local contractors and supports approximately 300 construction jobs.

Enviva expects that demand in Europe, Asia and the United States will continue to grow and they anticipate expanding their footprint in order to meet this demand.

WOODLAND – The Northampton County Sheriff’s Office has two shootings here under investigation, including one that sent a local woman... read more