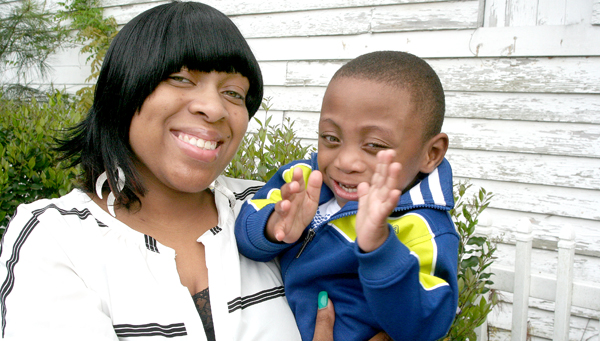 Tiffanie Watford Williams and her son, Jeremiah, have each overcome health issues – the mom now disease free from breast cancer and the son developing well after a premature birth. Photo by Amanda VanDerBroek

And if you’re ever in doubt just ask Tiffanie Watford Williams.

In several months, the 27-year-old mother has gone from battling Stage 4 breast cancer to having no evidence of the disease.

It’s the second miracle Williams has witnessed in her life. The first was her two year old son, Jeremiah, who was born at 25 weeks gestation without a heart beat and weighed just over a mere one pound at birth.

Dealing with the trial, tribulations and demands of having a premature baby unexpectedly prepared Williams when she was diagnosed with Stage 4 breast cancer in September. By the time the cancer was found it had metastasized to her arm and fractured the humerus bone.

After surgery to repair her broken arm and 20 days of radiation for the humerus tumor, Williams married her husband, Michael Williams in November. After their wedding he drove her to Chapel Hill to get a port and within days Williams had her first of eight rounds of chemotherapy.

“It was rough; my first four (treatments) were intense,” she said. “It (chemo) is so strong and toxic, something your body is not used to at all. It not only attacks the cancer cells, but normal cells too.”

Williams said she could feel a difference almost immediately. Then the physical symptoms began; first it was her taste buds, then her skin started to get dry and darkened, and then her hair started to fall out.

“That was the hardest part,” she said. “I kind of went through a depression because you’re used to looking a certain way. It was hard to look in the mirror and see (the hair loss).”

Williams soon took control of the situation by shaving her head. She added she did a lot of crying during that time and even though everybody was supportive, it was something she had to accept on her own. Her husband made the transition a little easier by shaving his own head in unity.

The slight smell of fragrant hand soap or food would bring on bouts of nausea for Williams. People were prohibited from cooking in her home and all her scented lotions and soap were packed away for after chemo.

“Sometimes I was too sick or too weak to get out of the bed,” she said. “Once I started to feel better it was time to get another treatment.”

Williams said the last four treatments were mild, but they still affected her bones and joints making it painful to walk or have Jeremiah touch her.

The final treatment came on March 6 and three weeks after she had a lumpectomy to remove the breast tumor.

The tumor had shrunk so much from the chemo treatments that doctors had to use a surgical indicator to mark where there was cancer. Doctors removed the tumor along with a margin of good tissue to make sure all of the mass was gone. A few days later the doctor called Williams to tell her the margins of the tissue taken out were clean of cancer.

After an MRI and a PET scan even better news was given by doctors.

“Everything was clean,” she said. “With me being Stage 4 they always say it is incurable when you have an additional tumor outside of the breast wall, so instead of saying remission they call it no evidence of disease.”

Every three months Williams will have to get a scan to check for cancer. Her tumor was estrogen positive and with medication doctors are hoping to shut down the hormone to lower the chance of the disease returning.

“I just look at it like I’m still here for a reason,” she said. “I know my baby needs me so I’m just doing whatever it takes to be here.”

Williams fight against breast cancer wasn’t a lone one. She had an army of “Pink Warriors” at her side helping her through the battle.

“It started with just a group of my close friends,” she said. “When I started chemo I was really sad and kind of depressed, so a group of my friends would come to my house once a month.”

“Everybody that came to the (wig) party wore a wig so I didn’t (feel self-conscience),” she said. “There were like 15 of them and after the party everybody donated their wig to me.”

Williams said “Pink Warriors” has expanded to those outside of her own group of friends to those she meets in public places who declare themselves a “Pink Warrior”.

Williams has run with the idea and is currently having t-shirts made for her soldiers to show their support.

Her mother, Linda of Conway, has been one of Williams’ biggest supporters.

“A lot of people see the strong side of me, but very few have seen me when I was at my lowest,” Williams said. “She’s always here; no matter what it is I will ask her and she will do it. …There were times she had to feed me and clothe me; a lot of people never saw that but she did and my husband did.”

Jeremiah also did his part by keeping his mom on her toes like a typical toddler. Williams said his rambunctiousness made her find the energy to not only run after him, but fight for her life.

“Now I can appreciate it, because sometimes it felt like if it wasn’t for him I would have wanted to give up,” she said.

Williams said it was all the support that kept her determined through her treatment and let her distinguish herself from the disease.

“I’m not letting cancer consume me,” she said. “I’m still a wife, a mother, there’s so much more to me.”

It’s not unusual during trip to the local Wal-Mart or a grocery store for Williams to get a look or two from strangers.

After her and Jeremiah’s story appeared in a November edition of the Roanoke-Chowan News-Herald and other media outlets, Williams has been able to use that story to inspire others.

“I’m doing a lot of motivational speaking and outreach programs,” she said.

Williams was recently the guest speaker for the Bertie High School Marching Band Banquet. During that event, the band director announced the marching band would dedicate their season (beginning in the fall) to honor Williams.

“They’re going to be adding different pink things to their uniforms, they’ll have t-shirts with Pink Warriors,” she said.

Last December, staff from Vidant Hospital in Greenville selected the Williamses as the Make a Wish Family for Christmas with the NICU.

“Just for people to be that kind and have a heart so big…they were like our angels,” she said.

Recently, the Children’s Miracle Network contacted Williams to tell her Jeremiah had been chosen to be one of the 2013 Miracle Babies through Vidant Hospital. He will serve as an ambassador for Eastern North Carolina.

“For the whole year we will participate in Children’s Miracle Network,” she said. “We’ll be doing programs; they have a radiothon and a telethon in May.”

Through the work with the Children’s Miracle Network, Williams said there has been a consistent reminder that miracles do happen, not only for Jeremiah, not just for her, but for many others.

With no evidence of cancer in her body, Williams has returned back to work part-time with the Roanoke Chowan Domestic Violence Task Force.

Jeremiah has also made progress. He’s beginning to eat more by mouth and there are plans in place to remove his feeding tube.

“He’s pretty much your typical two-year-old,” she said.

In the meantime, the word miracle seems to come up everywhere she and Jeremiah go. Williams has always considered her son a miracle and now she’s grateful for her own.

“There’s not many people that you find that go from Stage 4 and then to no evidence of disease,” she said. “It’s still something that plays at the back of your mind, but it just taught me that life is short and you never know what can happen. Instead of me dwelling on the bad I try to live each day the best that I can.”