Toby and Angela King of Colerain announce the upcoming marriage of their daughter, Cynthia Rose King, to Eithen Jackson Williams, the son of Wayne Williams of Merry Hill and Monia Williams of Windsor. Grandparents of the bride are Marshall and Velma Hughes of Colerain, and the late Betty Vaughan. Grandparents of the groom are Larry and Christine Williams of Merry Hill, and the late C.J. Rose and Dorothy Rose. Cynthia is a 2012 graduate of RCCC with an Associate Degree in Nursing and is now employed with DaVita. Eithen is a 2010 graduate of NASCAR Technical Institute and Universal Technical Institute and is now employed with Severn Peanut Company. The couple will exchange vows on May 18 at Perrytown Assembly of God Church. The couple will reside in Colerain. 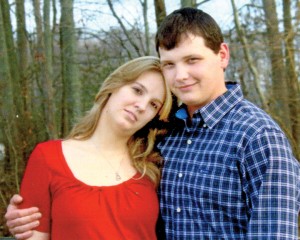