COLERAIN – His former teammates at UNC-Chapel Hill called him “Tree Top”, and at 6’7” and 325 pounds the reason is obvious.

Nowadays those leaves on the tree tops could represent plenty of green for former BertieHigh School and UNC-Chapel Hill offensive lineman Travis Bond.

Saturday, the Colerain native was selected in the seventh round of the 2013 NFL Player Draft by the Minnesota Vikings, the 214th player chosen. 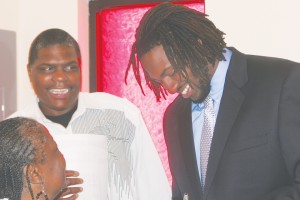 Former Bertie High star Travis Bond (right) signs autographs and shares a laugh at Greater Wynns Grove Baptist Church in Colerain on Sunday. Bond was tabbed in the 7th round of the 2013 NFL Draft by the Minnesota Vikings. Staff Photo by Gene Motley

Back in Colerain on Saturday afternoon, Bond, an offensive lineman in college & high school, was sweating it out and waiting it out watching the draft with family and friends at home until the phone rang and he got a call with the good news from Minnesota general manager, Rick Spielman.

“It feels good now that it happened,” he said with a smile in an interview on Sunday.  “This was the longest wait of my life,” he added with a grin, “a lot of stress.”

Bond was an honorable mention All-Atlantic Coast Conference selection as a senior in 2012 after grading out at 88 percent or higher in four games and helping pave the way for a record-setting Tar Heel offense that featured the ACC’s leading rusher in Giovani Bernard. He was one of five UNC draftees and third Carolina lineman picked.

“Yes, I get to block for Adrian Petersen (the NFL’s leading rusher in 2012),” he said. “They (Minnesota) like to play smash-mouth football and that’s the kind I like to play, too.”

Bond hopes to finish this semester of school at UNC before he heads to the Midwest and the Twin-Cities for a mini-camp, and he won’t have to wait long.

It will culminate a furious spring and winter for Bond. Because UNC was not eligible for post-season play his only all-star game appearance was in the “Texas-vs.-the Nation game back in Allen, Texas on February 2nd. Bond’s outstanding play had scouts drooling over his talent as the Nation team won, 24-16.

“I got plenty of good feedback from that game,” he says now. “The competition was very high.”

From there, Bond went to Florida to train with world-renowned trainer Pete Bommarito at Bommarito’s Sports Performance facilities.

“It helped me get my 40 (yard-dash) time down and prepared me for the Combine,” he says.

The NFL Combine in Indianapolis at the end of February followed and Bond graded out at 54.6. That low score didn’t deter him; instead, he went back for  more training and awaited the UNC Pro-Day in Chapel Hill on March 26th.

After that workout before all 28 NFL teams, Bond received the most feedback and interest from the Vikings and the Pittsburgh Steelers and was prepared to sign a free agent deal with one or the other had he not been drafted.

“The coaches at Carolina really pushed me to expose my real potential,” Bond says now. “Coach Kap (UNC offensive line coach Chris Kapilovic) pushed me to the limit. They always stressed to be great at what you do.”

Bond says his ideal as a pro lineman is former Dallas star and 2013 Hall-Of-Fame inductee Larry Allen, who in a dozen seasons with the Cowboys helped them win three Super Bowl championships.

“That’s what I want to be five years from now,” he adds, “a Super Bowl winner.”

Bond also pays tribute to the coaches in the Bertie County community that helped his development along the way since grade school.

“I owe a lot to coach (Curt) Polson, coach Williford, and coach Moore from back in the days at C.G. White (Middle School),” he said. “Then in high school I had coach (Tony) Hoggard and coach Moore (Calvin, now the BHS principal).

“Kent and I were really a lot alike,” Bond says reflecting with a smile back on their dual dreams, desires, and motivation from their Bertie High days. “We both took our sports seriously and we both could create great predicaments.”