JACKSON – An apparent argument between two correctional officers here at Odom Prison has led to bloodshed. 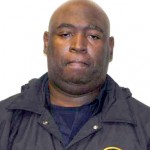 The incident occurred at 6:10 a.m. off prison property at a small country store located at the end of the road leading to the correctional facility, according to Northampton Sheriff Wardie Vincent.

Vaughan was transported by Northampton County EMS to Halifax Regional Medical Center in Roanoke Rapids and later to Vidant Medical Center in Greenville where emergency surgery was performed. Vaughan reportedly suffered severe lacerations to his arms as well as stab wounds to his neck and back.

Bell was charged with attempted first degree murder, which carried a $250,000 secured bond, and assault with a deadly weapon inflicting serious injury ($25,000 secured bond). He is being held in the Northampton County Jail and is scheduled to make his first court appearance on May 2.

Vincent said the physical altercation between the two officers occurred off Odom Prison property. However, he said the event leading up to the stabbing actually began inside the prison’s walls.

“From what we can ascertain at this point there was a misunderstanding between the two officers over some paperwork and a disagreement ensued,” Vincent stated. “At some point during that disagreement, a statement was made by one of the officers that, ‘I’ll meet you at the store when you leave work.’ It was at that store where the two men met and a tussle took place. Mr. Bell allegedly pulled a knife and cut Mr. Vaughan several times.”

Vincent said Vaughan was a veteran officer at Odom, working there over 20 years. He added that Bell was in his first year as a correctional officer.

COLERAIN – His former teammates at UNC-Chapel Hill called him “Tree Top”, and at 6’7” and 325 pounds the reason... read more