A 63-year-old Jackson man died Friday afternoon after the pickup he was driving collided head-on with tractor-trailer on Highway 158.

Trooper J.D. Warren of the state Highway Patrol said the wreck that claimed the life of Don Evans occurred around 12 noon near the Jackson Bypass Road intersection between Faison’s Old Tavern and Jackson.

Evans was driving eastbound on Highway 158 when he crossed the centerline and struck a westbound Mack truck driven by Alan Pullin of Fredericksburg, Virginia.

Evans was declared deceased at the scene. Warren said there is no explanation why Evans veered into the westbound lane.

Warren said there is no reason to suspect alcohol was involved but the Highway Patrol has requested a toxicology report from the medical examiner.

Pullin was not injured and no charges will be filed.

(Lance Martin, Publisher and Editor of www.rrspin.com, granted permission for the use of this story and photograph.) 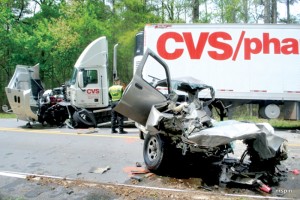 Don Evans, the driver of the pickup truck in the foreground, was killed during a Friday collision with the 18-wheeler shown in the background. Photo by Lance Martin