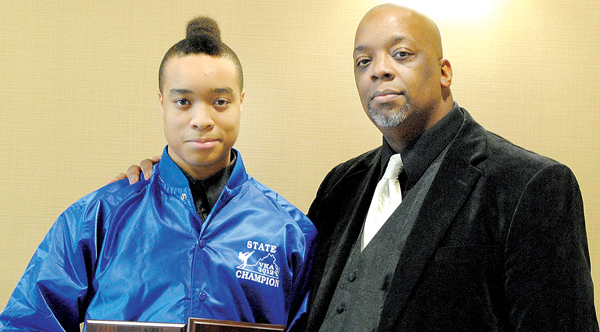 Former Gates County resident Willie C. Cordy (right) has trained his son – Willie C. Cordy III – well, so much to the point where the youngster has earned a spot on Team America – a martial arts unit that will travel overseas.

Like father…like son, both with award-winning talent, but now on a different level of competition.

Willie C. Cordy Jr. has a passion for creating art. The 1985 graduate of Gates County High School went on to pursue art school and graduated with an Associates in Visual Communications from the Art Institute of Atlanta in 1987. He has a Bachelors degree in Fine Arts & Graphics from Norfolk State University and is nearly finished with his goal to obtain a Masters degree in Fine Arts.

“My art career has taken me places that I would have never been exposed to otherwise,” said Cordy. “I designed for the 1996 Olympics in Atlanta and I created and designed for celebrities such as Bobby Brown, TLC, Nice & Smooth, Public Enemy and many more during the 90’s.

“However, no job has had such an effect on me like the one of being a father,” he added. “My son is my pride and joy. I left my design career with celebrity behind me for the career of being a father.”

Willie C. Cordy III opted to take his enormous talent in another direction. While his father was once a dominant force in the world of martial arts (he trained at the “Tai Chi Association” in Decatur, GA where he studied traditional Shaolin Kung Fu), the youngster started his training at the “Authentic School of Karate” under the Hunter family in May of 2003 in Portsmouth, VA.

Over the years, Cordy Jr. has proudly watched his young son develop into a man.

Young Cordy earned four State Championship titles in 2012 at the Commonwealth Games of Virginia and the Virginia Karate Alliance 2012 circuit. The VKA awarded him with two Competitor of the Year plaques for 2012. The two gold medals earned him a spot to represent Virginia in 2013 State Games of America Tournament in Hershey PA.

“We will be traveling with Team America to Dublin in pursuit of the Gold and an experience of a life time,” said Cordy Jr. “Willie was asked to join Team America after his stunning run in 2012. He won every tournament in the VKA circuit last year.”

Master Willie Hunter remains young Cordy’s head instructor in Karate with the elder as his coach and stratagist.

“I am my son’s coach for his martial arts training,” said Cordy Jr. “He has had several martial arts instructors over the years, training in everything from Shito Ryu/ Shotokan Karate, Wing Chun Kung Fu, Shoalin Kung Fu, Taekwondo Moo Duk Kwan and Olympic Style Taekwondo.”

“I have always pushed him to always put his best forward in martial arts and in life,” said the father.

The “life” teaching from father to son is already reaping rewards as well. Cordy III an honor roll student at Cradock Middle School in Portsmouth, VA and has just been nominated for the Honor Society.

Cordy III dreams of competing on the United States Olympic Team will come true one day as long as the arts stay open to him.