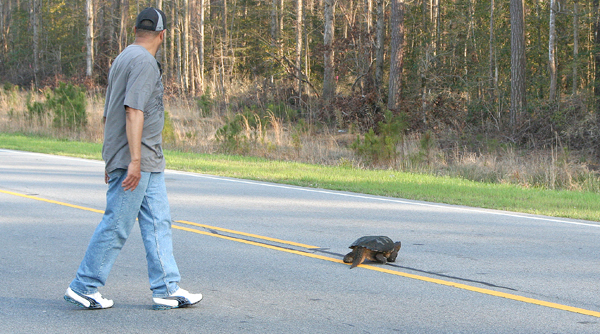 A good Samaritan watches for traffic while a large snapping turtle cross a busy stretch of NC 11 on Wednesday afternoon near Tom Browne Road. Staff Photo by Amanda VanDerBroek

MURFREESBORO – Why did the turtle cross the road?

Apparently to turn around, and go back to the other side.

On Wednesday evening, a large snapping turtle meandered its way on to NC 11 outside of Murfreesboro. The reptile had just made it across the major roadway, dodging passenger vehicles and two tractor trailers, when it decided to turn around and cross once again.

Two good Samaritans stopped to help the snapper; one directed traffic while the other managed avoid the turtle’s razor sharp beak to grab its tail and place it safely in a ditch.

“A lot of what people are probably seeing right now is that snapping turtles, and other aquatic turtles, are starting to become active and starting to move place to place (after the cold weather),” he said.

Turner said aquatic turtles will often bury themselves for the winter in mud at the bottom of a body of water where it is temperature neutral.

“Turtles are cold-blooded there for their body temperature is the same as the water, and when it is cold their metabolism slows down and they do not need as much oxygen,” he said.

Turner said the oxygen the reptiles do need for hibernation (or brumation) is taken in through the thin skin around their neck and tails.

He added turtles start to become active around April, May and June with the earliest being January.

Common Snapping Turtles are the type of snapper that inhabit North Carolina. The turtles typically live in permanent water bodies, but usually water bodies with soft bottoms and abundant aquatic vegetation. Small ones can be found in streams. Snapping turtles have also been found in brackish water along the coast. According to NC PARC (NC Partners in Amphibian and Reptile Conservation), the Common Snapping Turtle can weigh anywhere from 10 to slightly over 50 pounds.

Turner said mating for snapping turtles’ can happen anytime from April to November.

“They lay their eggs in late spring to September with June being the peak,” he said.

Baby snappers will hatch from late August through early October. Turner added with cooler weather moving in the later months, hatchlings may stay right where they are until spring.

Snapping turtles are omnivores which mean they will eat anything from meat to vegetation.

“They often eat carrion (decaying flesh) and serve a unique role when it comes to the environment,” he said. “Even if you think they’re ugly, they serve a purpose.”

Turner said snappers are often captured for their meat. There is a state law against “commercial taking” of any native turtle in North Carolina. One cannot possess, collect, transport, purchase or sell more than five turtles in any given year.
Besides its valued meat, the snapping turtle is also known for its nasty disposition. Turner said reptile will often hiss if it feels threatened and will bite if need be.

The turtle’s defense mechanism can be cumbersome, especially if someone is trying to help a turtle cross a road.

“Roads are probably the toughest thing for all turtle species,” Turner said. “We’ve fragmented the land with roads and highways and they have to cross them.”

This often leads to turtles being struck and killed by vehicles.

Turner said he understands those who stop to help turtles cross the road safely, a task he’s done himself in the past.

However, he urged good Samaritans to be careful and not create an incident that could have been prevented.

“It’s not worth causing an accident for,” he said.

He also cautioned helpful motorists to beware of the unpredictability of the reptile they’re attempting to assist.

“Most of the time (snapping turtles) can be picked up by the tail, but all turtle species can bite,” he said.

WINDSOR – It appears that nothing Dwayne Conner said during a phone call to the Ahoskie Police on the morning... read more