MERRY HILL – Jacob Richard Tayloe and Victoria Elizabeth Robison were united in marriage on February 14, 2013 at Capeharts Baptist Church in Merry Hill. Officiator of the ceremony was the Reverend Webb Hoggard of Windsor.

The bride is the daughter of Tim and Annette Robison of Navarre, Florida. She is the granddaughter of John and Mary Anne Robison of Urbana, Ohio, and Zenith Tilford of Manteca, CA and the late Douglas Tilford. 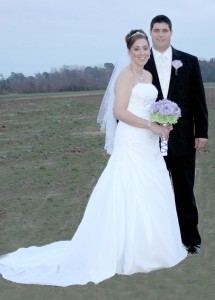 The groom is the son of Herbie and Alice Tayloe of Ahoskie.  He is the grandson of Fred and Marjorie Tayloe of Aulander, and J.B. and Lula Brown of Ahoskie, and the late Mary Alice “Pug” Brown of Colerain.

David Robison, nephew of the bride, was the Ring Bearer. The pianist was the Rev. Eddie Karriker; vocalists were Andrew Robison and Jecoliah Farmer.

A reception was held at Cashie Convention Center, Windsor.

After a honeymoon trip to Gaitlinburg, TN the couple now resides in Ahoskie.

Amber Pavey of Woodland and Richard Kramer of Woodland announce their wedding plans for 2 p.m. on Saturday, April 27... read more