POWELLSVILLE – A local family is safe, but lost their home in a fire near here Monday morning.

The Sharan Cherry residence at 210 Ward Road (off US 13 near Highland Memorial Gardens) was a total loss as a result of the blaze, one reported at 9:17 a.m.

“It was fully engulfed when we arrived and our units were on the scene within five minutes of us receiving the call,” said Powellsville Volunteer Fire Department Chief David Powell.

Powell said that Cherry resides in home with his wife, Gail, and grandson. Mr. Cherry was the only person at home at the time of the fire.

“He told me that he was out back sweeping the wheelchair ramp when his brother, who lives next door, noticed smoke coming from the residence,” Powell said. “Apparently, the fire spread very quickly because when Mr. Cherry was able to call it in he said the house was already fully involved with flames.”

Powell said that Mr. Cherry is disabled, but is able to move around in his wheelchair.

“I’m sorry he lost his home, but thank goodness he was already outside when the fire broke out,” Powell said. “I hate to think what may have happened to him if he was inside at that time, especially knowing now how fast that fire spread.”

Powell added that the residence was a singlewide mobile home that had undergone several additions over the years.

“That made it impossible for us to enter the home and attack the fire from the inside; the roof was already compromised when we got on the scene,’ Powell stated. “It wasn’t stable enough for us to enter.”

As to the cause of the blaze, Powell said he believed it to be electrical in nature.

“There was nothing cooking in the kitchen, nor was there a fire built in the fireplace at that time,” Powell noted. “Mr. Cherry told me they had a breaker to trip on Sunday night, causing them to lose power in the kitchen area. They re-set the breaker and everything was okay for the remainder of the night. However, when we checked the breaker after the fire was extinguished, it was tripped again.”

Powell said he wasn’t 100 percent sure, but he believed the Cherry family did not have insurance on the home.

“If that’s the case then they need all the help they can get,” he said. “We’ve contacted the Red Cross to offer what short-term assistance they have, but this family will need long-term help to get a roof back over their heads and clothes on their backs.”

The last Powellsville Fire unit cleared the scene at 3:45 p.m. 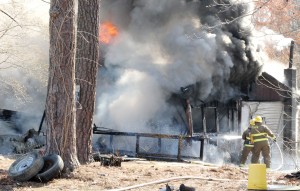 WINDSOR – Beginning in July state legislation will require citizens to pay their vehicle tax when they renew their registration... read more