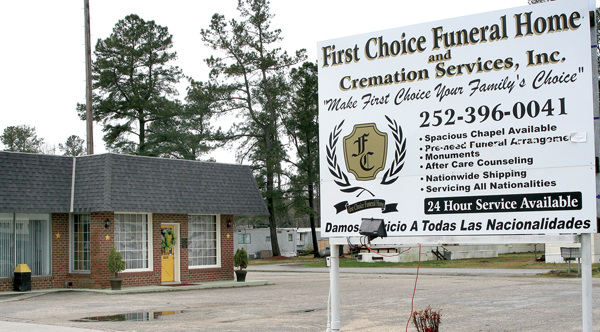 First Choice Funeral Home, located on Main Street in Murfreesboro, has been shut down by order of the North Carolina Board of Funeral Service due to multiple violations. Staff Photo by Amanda VanDerBroek

MURFREESBORO – A funeral home here has been ordered to close its doors.

Based on adjudicated facts, investigation of a complaint lodged by a local family, and an October 2012 on site inspection of the facility, First Choice Funeral Home had its establishment permit permanently revoked by order of the North Carolina Board of Funeral Service (NCBFS).

Additionally, two former managers of the Murfreesboro-based business – Allen Ladd Jones and Everard Auston Hughes Jr. – each had their funeral service license suspended for a period of two years.

The NCBFS decision was reached on March 14. On that date, First Choice Funeral Home was ordered to “cease accepting dead human bodies for funeral service” and were permitted a period of five days to complete all existing funeral services and other activities defined as the practice of a funeral service under NC General State Statutes.

The actions taken by the NCBFS were the result of evidence heard by that entity at meetings conducted on Jan. 10 and Feb. 13 of this year.

As part of the board’s finding of facts, First Choice Funeral Home received its funeral establishment permit on Dec. 22, 2010. The NCBFS said First Choice was not licensed to sell preneed services at any time, nor were David and Gilda Robertson, listed as the officers of the corporation owning this funeral home, licensed by the Board or registered as trainees. The Board added that Christine Stephenson and Waverly Joyner Jr., both employees of First Choice, never received their license nor did they register as trainees.

The initial matter heard by the NCBFS was a complaint from a parent of a deceased family member who, according to his testimony, chose to use another local funeral home for services in early June of 2011. The parent was contacted by David Robertson for “the express purpose of soliciting the transfer of the remains of his son.” The father said he told Robertson he “would not use First Choice Funeral Home” but continued to receive additional telephone calls from those employed there.

In this part of the case, the NCBFS ruled that the continued telephone contacts to the father concerning the transfer of the remains of his son constituted harassment.

Jones also testified that he resided in Durham and Warrenton and was paid $400 to make arrangements upon being contacted by the Robertsons. He said he was not physically present at the funeral home on a regular basis and appeared when notified by the Robertsons that his presence was needed.

In August of 2011, First Choice Funeral Home submitted an application, signed by Jones, to the NCBFS for a funeral chapel. The Board returned the application five days later for failure to meet all registration requirements.

On Nov. 18, 2011, an agent of the NCBFS conducted an investigation of the Robertsons in an effort to determine compliance by First Choice Funeral home with the state’s General Statutes. Upon arrival at the business, the agent noted a telephone number listed as the one to call for assistance. That particular number was not the one listed for that business nor one for anyone licensed by the NCBFS for the funeral home.

According to the agent’s testimony, he met with David Robertson and was led to an office behind the front lobby. There, Robertson offered to sell the agent funeral services and merchandise without presenting the agent with a general price list as required. Robertson also did not give the agent price lists for caskets or outer burial containers prior to discussing the sale of those items.

Upon receiving the general price list, the agent noted it did not contain the following: the telephone number of First Choice Funeral Home, disclosure concerning basic services, and the correct minimum price for direct cremation.

Robertson also presented the agent an advertisement offering to sell “pre-need funeral arrangements” when First Choice is not licensed to sell such services.

NCBFS Inspector Brett Lisenbee visited First Choice Funeral Home on Oct. 2, 2012. His inspection revealed that all embalming instruments were not stored in an enclosed cabinet or drawer; the identification tags were not made of durable, noncorroding material; there were caskets regularly offered for sale that were not listed on the casket price list; and First Choice was offering to sell preneed services on its outdoor business sign.

Combined, the NCBFS concluded that, based on law, First Choice Funeral Home committed 31 violations. Included among those infractions were that Jones failed to actively manage the business; the Robertsons and Joyner practiced funeral directing without a license; engaged in false and misleading advertising; engaged in activities that require a preneed license; failing to file a notification of death within 24 hours of assuming custody of human remains; failed to file a death certificate within the required five days; and engaged in fraud in obtaining a chapel registration.

The NCBFS ruled that neither Jones nor Hughes will be allowed to manage a funeral home until the two-year suspension ends. Both were ordered to complete a continuing education class in Funeral Rule compliance. If at any time during the probation period the NCBFS receives evidence that either Jones or Hughes have violated any of the Board’s laws or rules, the Board may impose such disciplinary action it determines as appropriate.

AHOSKIE – If you remember malt shops, 45’s purchased from your favorite record store, and the Hula Hoop, you may... read more