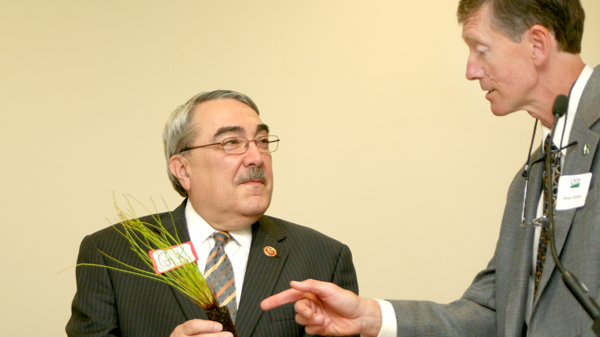 AHOSKIE – Local low to moderate income forestry landowners will soon benefit from a new project implemented through the Roanoke Center.

On March 27, Congressman G.K. Butterfield joined with officials from Roanoke Electric Cooperative and the Roanoke Center, the US Endowment for Forestry and Communities, USDA’s US Forest Service, and Natural Resource Conservation Service (NRCS), in announcing a $425,000 grant to the Roanoke Center to support sustainable forestry initiatives.

“We’re excited to collaborate with the US Endowment for Forestry and Communities, USDA’s US Forest Service and Natural Resource Conservation Service (NRCS) to embark upon the Sustainable Forestry and Land Retention Project,” said Curtis Wynn, Roanoke Electric Cooperative and Roanoke Center President and CEO, during the announcement held at the co-op’s headquarters outside of Ahoskie.

Congressman Butterfield applauded the work of Roanoke Electric their partners and the US Endowment’s investment on the project.

The Roanoke Center in partnership with the public agencies, non-profits, private businesses, universities and community groups will provide a comprehensive system of support to forest landowners in the five counties (Hertford, Bertie, Gates, Northampton and Halifax) to use sustainable forestry to retain and grow forest-based jobs and increase family wealth.

In addition, Wynn said planning and implementing aggregation strategies to help provide timber harvest and aggregation of third party certifications are also intended for the project.

“The services will be available to all forest landowners with a strong focus on assisting low- and moderate-income African-American landowners,” he said. “This is a region that has lost 95 percent of our African-American owned farms between the years of 1969 and 2007 mainly due to discriminatory practices by the USDA.”

“While our counties have struggled economically, the forest products economy Northeastern North Carolina has growing infrastructure in place with new market opportunities and Enviva’s new wood pellet mills, the ongoing operation of Kapstone mill in Roanoke Rapids and retooling the Domtar and International paper mills to de-fluff pulp,” said Wynn.

He noted the major port in Norfolk provides access to European market for wood pellets and the Asian market for fluff pulp.

Wynn said there will be some direct job creation that will include three or four part time or seasonal positions, primarily internships.

“We do have a very strong youth component of this project or apprenticeships to engage young people of color in natural resource career-based experiences—we’ve been told by our partners that is a rarity—and we want to show them the opportunities that exist in this area,” Wynn said.

At least 10 landowners will be assisted in clearing heirs’ property status to overcome the legal barrier to participate in the programs and activities that will generate revenue.

At least 40 landowners will be helped in varying stages of readiness in increasing revenue by an average of at least $500,000 each through the development and implementation of forest management plans and access to conservation programs.

Wynn said there is also a desire to develop feasibility analyses and implement business strategies for aggregation that may include, but not limited to, cooperative forest management by multiple landowners.

“We’re very thankful to the US Endowment Forestry and Communities for this grant contribution of $425,000 to run a project that will expand over a 30-month period and has an estimated cost of over $700,000,” Wynn said. “We along with our partners are in a major effort right now to find matching funds to come up with that amount.”

During his time before the crowd, Butterfield recalled being involved with a meeting with three other congressmen and Tom Vilsack, the current Secretary of Agriculture, who was then being considered for the position.

“We told Gov. Vilsack, as he was at the time, that we knew that the Department of Agriculture had not lived up to our expectations over the years and it had not the needs of small and rural communities,” he said. “It had a terrible history of discrimination against African-American farmers and that we expected help to maybe not change this legacy overnight, but at least to turn it and start pointing it in a different direction.”

Butterfield said Vilsack has lived up to that expectation and is responsive to talking with him and the other congressmen.

“What you see here today is an example of what his leadership has been,” Butterfield said.

He also spoke about the “10, 20, 30 Plan” in the Congressional Black Caucus, which takes 10 percent of federal resources and find communities that have had 20 percent of persistent poverty rate over the last 30 years. The plan has inspired the USDA to come up with the Strikeforce Plan to target resources to high poverty areas.

Peter Stangel, Senior Vice President of the US Endowment for Forestry and Communities, noted 60 percent of North Carolina is forest, which provides 68,000 jobs and generates an annual payroll of $3 billion.

“We’re here along with Leonard Jordan of NRCS and Amadou Diop with the Forest Service to take advantage of all the benefits that sustainable forestry has to offer to increase assets and income to help people hold on to their land,” he said. “And to that end we are delighted along with the Forest Service and NRCS to invest over a half a million dollars in the coming two and a half years in this project. In addition, NRCS and the Forest Service will put a lot of technical support into the program and be there to provide the background and knowledge that people need to be successful in their efforts.”

ROBERSONVILLE – Ackerman Grace hurled a two-hit shutout and added 4 RBI with his bat-play at the plate as Hertford... read more