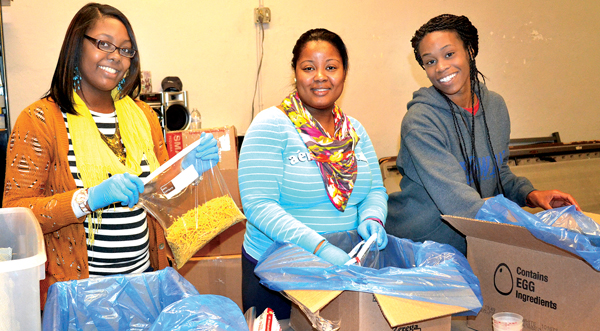 “I found out kids love me.”

That’s not the answer one might expect from someone talking about what they learned on a spring break mission trip, but when asked, it was what Donald Lewis, a junior at Chowan University, chose to share.

Lewis was one of 12 students and staff from Chowan who traveled to New York City over spring break to partner with Metro Baptist Church. The church, located in historic Hell’s Kitchen, is home to many different ministries, including Rauschenbusch Metro Ministries (RMM), a not-for-profit organization named after Walter Rauschenbusch, founder of the social gospel movement. Like its namesake, RMM is committed to bringing about social and spiritual transformation in the neighborhood it serves.

Students spent their days volunteering at a variety of organizations: the New York City Food Bank, Operation Exodus After-School Program, Concourse House After-School Program, and the Greenpoint Reformed Church Food Pantry. Students also had the opportunity to work with RMM’s clothes closet, while others painted cabinets that had recently been installed in the church.

When asked what she would remember most, sophomore Gerlisa Shipman responded, “The hams…definitely the hams.”

Shipman was referring to the hams that a group spent the day repacking at the Food Bank Warehouse in the Bronx. The repackaged hams would be distributed around the city, providing food to over 20,000 people.

When not volunteering, students were invited to be a part of conversations around the complex issues of homelessness and poverty in the city. On one day, students had the opportunity to tour a homeless shelter at Fifth Avenue Presbyterian Church where they learned that 3,000 people, more than the population of Murfreesboro where Chowan is located, spend each night on the street without shelter or bed. Another day, students were led in a discussion by Ronnie Adams, of the Cooperative Baptist Fellowship, regarding his work with the HIV/AIDS community. Adams encouraged students to think about ways they could be advocates in their community.

It was a full week of work, but students did have time to take in the sights. From playing chess in Central Park to standing in Times Square to shopping in SoHo, students were able to participate in the richness of city life. But exploring the city was also a reminder of the stark divide between the wealthy and the poor who live side by side in New York. Whether you are riding the subway or standing in front of a Fifth Avenue shop’s window display, there is a need waiting to be met.

Meeting needs is often the goal of mission trips. But students from Chowan were encouraged to take a different approach.

“People come here and think they are bringing God with them to this place,” Tiffany Triplett Henkel, one of the pastors at Metro, said to the students on their first morning in the city. “But we believe that God is already here, and working. We hope this week you will have the eyes to see God’s presence in this place, and the opportunity to partner in the work God is doing in our city.”

Given that hope, it turns out, “I found out children love me” is exactly the kind of answer one might expect. For a dozen Chowan students and staff, sacrificing their spring break opened up their eyes, and hearts, as they reached out to the needy of New York City for another successful mission experience from Chowan’s Campus Ministry.

To learn more about Campus Ministry at ChowanUniversity, contact Director of Church and Community Relations Lou Ann Gilliam at gillil@chowan.edu or (252) 398-6317.

WINTON – Out with the old, in with the new. The method of how two specific pots of state sales... read more