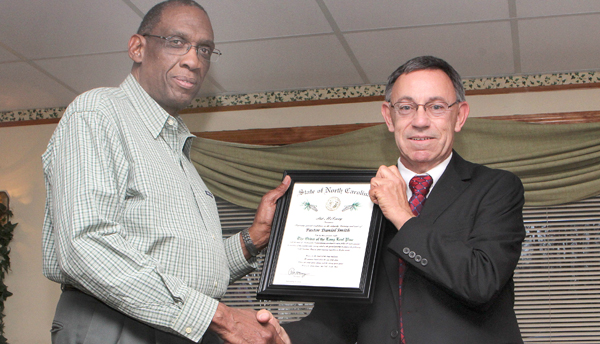 Like Graham, Smith is a saver of souls, but he cannot lay claim to being the Sheriff of Mayberry, nor a NASCAR superstar, nor a famed Hollywood actor, nor the greatest basketball player of all time, nor the host of a TV show.

However, the single common thread binding that group is they are each recipients of the highest civilian honor bestowed in the State of North Carolina – the prestigious Order of the Longleaf Pine.

Smith’s name was added to that list during the annual Bertie County GOP Convention held March 14 at the Heritage House in Windsor.

“All I can say is thanks,” Smith said upon accepting the framed certificate. “I encourage all of you to do what you do, whatever God has assigned you to do. Do it with all your heart, do it with all your might, and don’t stop doing it until you die.”

“It was a real honor for me just to present Dr. Smith with this award, one approved and signed by Governor Pat McCrory,” said Bertie GOP Chairman Garry Terry. “His accomplishments are outstanding, and I’m so thrilled to see many of his family and friends here tonight to witness an occasion such as this. I thank him so much for the many things he does in our community, all in God’s name.”

The highly quoted first verse of the Order of the Longleaf Pine, from a poem by Leonora Martin and Mary Burke Kerr that also serves as the state’s official Toast, is as follows:

“Here’s to the land of the long leaf pine,

The summer land where the sun doth shine,

Where the weak grow strong and the strong grow great,

Here’s to “Down Home,” the OldNorthState!

Here’s to the land of the cotton bloom white,

Where the scuppernong perfumes the breeze at night,

Where the soft southern moss and jessamine mate,

‘Neath the murmuring pines of the OldNorthState!

Here’s to the land where the galax grows,

Where the rhododendron’s rosette glows,

In the “Land of the Sky,” in the OldNorthState!

Here’s to the land where maidens are fair,

Where friends are true and cold hearts rare,

The near land, the dear land, whatever fate,

The blessed land, the best land, the OldNorthState!”

Dr. Smith is a native of New Orleans, Louisiana. He retired in 1986 from the U.S. Navy as a Senior Chief (Aviation and Electronics Technician) and moved to Ahoskie.

His list of accomplishments is long – Administrator of the Soul Saving Station, and Youth Development for the Hertford County Cooperative Extension Service. He is the founder of several agencies, to include the Ahoskie Christian Center, Ahoskie Christian Child Care Center and Roanoke-Chowan Community Development Corporation, and established the Kindergarten Academy to assist in developing community literacy. Smith has also served as a Cub Scout leader.

He is a graduate of the North Carolina Rural Development Institute. He has received the Governor’s Award for Outstanding Volunteer Service.

Smith also serves to help feed the hungry through the Ahoskie Food Pantry, and pays tribute to military service members by hosting various events for veterans. He provides ministerial services to area jails and prisons.

Smith is married to a Hertford County native, Eva Bazemore of Cofield, and together they began the Ahoskie Christian Center in 1993. He said he and Eva came up with an idea for the Center to  serve as a catalyst for spiritual, social, and economic change in the community.  The Center is a non-denominational Christian church.

MURFREESBORO – The pay is low…okay, it’s none at all…but the end reward is greater. Communities in Schools of Hertford... read more