WINDSOR – A combined effort between law enforcement agencies from two municipalities in neighboring counties has landed an alleged drug dealer behind bars.

According to information from Windsor Police Lt. R.L. Morris, Montrell L. Outlaw of 503 College Street, Apartment #1, was arrested Friday following a search of his residence by officers of the Windsor Police Department and Ahoskie Police Department. Outlaw was charged with possession of marijuana with the intent to sell and deliver, maintaining a dwelling to keep or store a controlled substance, and possession of drug paraphernalia. He was placed under a $12,500 secured bond and his first court appearance is scheduled for March 20. 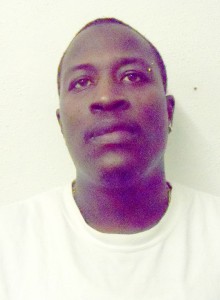 Morris said the search warrant came after an investigation he conducted along with WPD Officer Jason Thomas.

Through the investigation, Morris stated that evidence was obtained which showed illegal drugs were being sold from the residence by Outlaw, who lived there with his two minor children.

Morris said that marijuana, individually packaged for sale, was discovered inside the residence as well as other items associated with illegal drugs. He said that other drugs were suspected of being in the residence and a K9 unit from the Ahoskie Police Department was contacted to come to the scene. APD Sgt. Michael Kellett along with his K9 Nero arrived and within minutes after beginning the search, Nero located a large amount of marijuana in an area that may have been passed over by a personal search.

“This is a great example of agencies working together to better our communities,” Morris noted. “Drug dealers work together and know no boundaries. As law enforcement agencies we have to do the same or these dealers may be one step ahead of us.

“I hope this arrest will show other drug dealers in the town of Windsor that we will not tolerate illegal drugs in our communities and all officers in the town will work hard to enforce the drug laws of North Carolina just as we do every law,” Morris added.

Morris said he wanted to thank Ahoskie Police Chief Troy Fitzhugh for the assistance of his agency. Along with Sgt. Kellett and Nero, other APD officers involved were Captain Michele Garrett, Lt. Jeremy Roberts, and Sgt. Stephen White.