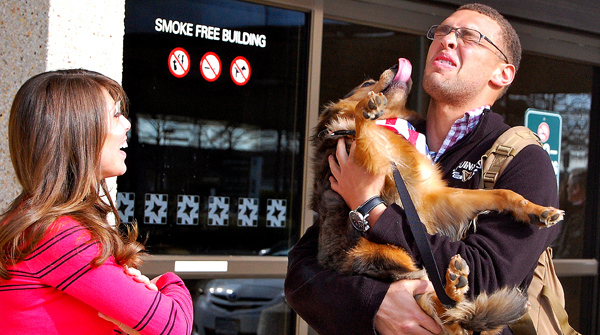 NORFOLK, VA – It’s typical for soldiers coming home from military deployment overseas to meet a new member of the family for the first time.

However, in the case of David Wolery, a Naval Operations Specialist, his homecoming on Friday included being licked in the face by his furry, four-legged new friend.

This story doesn’t begin with Friday’s homecoming. It actually began at the end of February when PAWS of Hertford County, a local animal rescue group based in Winton, received an unusual adoption request…..someone deployed in Bahrain wanted to adopt a dog.

In July 2012, Wolery was deployed with the Navy to Bahrain.  He left behind his fiancée, Loral McNamara.  During his deployment the couple decided that when he returned they would “start their family” by adopting a dog.

To remain busy during his off duty hours, Wolery began looking at adoptable dogs and rescue groups. He said he never planned to stumble upon what he felt was “their dog” while still deployed.  But, stumble he did upon Prinz, a Keeshond mix, at PAWS of Hertford County. The more he read about Prinz the more he knew this was “their dog”.  So, he contacted PAWS as he was afraid Prinz may be adopted to another family before he returned from deployment in March. His fiancée drove to Winton with a friend to meet Prinz.

The normal approval process for PAWS of Hertford County includes a firm requirement that everyone in the household participates in the adoption process.  However, in this case, because Wolery was deployed in Bahrain that requirement was waived. However, he wanted to be involved in this important first step to building his new family so they connected via FaceTime during the adoption and most evenings since then.  Up until Friday’s homecoming, Prinz had only met his new owner via the Internet.

“I fell in love with Prinz the minute I met him and I instantly knew he would be the perfect dog for David and I,” McNamara said. “David and I like to do things as a team, so David was present during the entire adoption via FaceTime. David has been able to get to know Prinz via FaceTime over the past month, and that has been a huge boost in his morale while being deployed.”

Wolery connected via the Internet with Prinz and Loral most mornings and has been involved in helping to select toys, bedding and other supplies for his new pet online.  “David is so excited to meet Prinz that I decided to bring him to the airport to greet him on Friday,” McNamara said.

PAWS of Hertford County is committed to making sure every animal adoption is approved by the household members to ensure successful placements and this was no exception.

Julie Parker, PAWS of Hertford County Adoption Coordinator, stated, “What was so touching and special was that Loral and David went through the adoption process over the Internet because they wanted to participate as a team. They are engaged and Prinz is their first dog together. He is a very lucky boy to have such conscientious pet parents.”

Working together with the couple, PAWS of Hertford County conducted their interview and “meet and greet” process with one owner present in person and the other present from Bahrain via FaceTime. Parker said that PAWS was thrilled to be able to be present at the homecoming and personally thank this local military family for their service by helping them connect with a new furry family member.