Thanks to postings on Facebook, an alleged child molester is behind bars under a quarter-million-dollar bond. 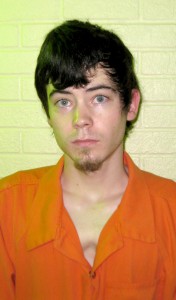 Brandon Gilmore, 21, of Carlock, Illinois was arrested in Windsor on March 13 following a lengthy investigation conducted by Windsor Police Lt. R.L. Morris. Gilmore stands charged with two felony counts each of first degree statutory sex offense, indecent liberties with a minor, and crimes against nature. He was placed in the Bertie-Martin Regional Jail under a $250,000 secured bond.

Morris said his investigation involved allegations of Gilmore having sexual relations with a child under the age of 10. That investigation led to evidence sufficient to obtain warrants for Gilmore’s arrest.

“Mr. Gilmore was living in Windsor during the time of the alleged offenses, however he is currently living in Illinois,” Morris said. “Information was further obtained at the time warrants were filed in the matter that Mr. Gilmore would be traveling to Windsor during the week of March 10. The information was gathered due mainly to postings on Facebook.”

Armed with that information through social media, Morris informed his fellow officers at the Windsor PD to be on the lookout for Gilmore. On March 13, Gilmore was arrested while at Dollar General in Windsor by WPD Officers Frank Ratzlaff and Blake Mizelle.

“Officer Ratzlaff knew Mr. Gilmore and recognized him at the store,” Morris stated. “The arrest was made without incident. These charges filed (against him) are very serious felonies.”